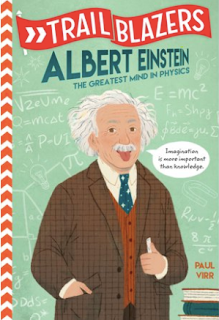 Paul Virr’s biography of “the greatest mind in physics” begins not with Einstein’s birth in 1879 but with the event that thrust the German-born scientist into the public spotlight: the solar eclipse of 1919. The scientific study of the eclipse, Virr says, proved Albert Einstein’s Theory of Relativity, transforming the humble patent clerk into a worldwide celebrity. Virr hooks his middle grade reader not with boring dates and discussions of family lineage but by telling the personal stories that reveal how Einstein became a revered global figure. Trailblazers: Albert Einstein is part of the Trailblazers biography series, which attempts to hit the sweet spot for middle grade students between the elementary-level Who Is? series and more in-depth (aka dull) biographies on library shelves. Virr should be applauded for his efforts here, considering his valiant attempt to explain Einstein’s complex scientific theories in ways a ten-year-old may understand. Through well-written sidebars and asides, Virr connects Einstein’s life and work to scientists like Galileo and Sir Isaac Newton and to events like the two World Wars. He also portrays Einstein as a real human being who experiences frustration, rebelliousness, love, and deep sorrow. The book’s illustrations, by the Artful Doodlers, add some humor and depict many of Einstein’s famous quotes. Paul Virr covers a lot of ground in about 150 pages and, through short bursts of text, shows the very full life of one of the most famous people of the 20th century.

From its first chapter, Trailblazers: Albert Einstein addresses Einstein’s Jewish heritage and his life as a Jew. While Virr makes it clear that Einstein was never a highly religious Jew, he does not play down the ways in which antisemitism affects the scientist’s life. The book contains a number of asides and references that speak to the Jewish experience in Europe. While these are not necessarily in-depth sections of the narrative, they are straightforward and easy for a middle grade reader to understand. In general, Virr does an excellent job of writing to his intended audience. He does not dwell on minutia, nor does he use vocabulary that could be difficult for an 8-12-year-old to understand. This is particularly true of the sections that seek to explain Einstein’s theories and scientific ideas. It is difficult to judge the book on its literary merit because it is part of a series that follows a certain formula for its narratives. The goal for these Trailblazers books is to make the subject of each biography palatable to a middle grade audience. So, there is a real entertainment factor to the book. Even so, it does meet the criteria used to evaluate books for the Sydney Taylor Book Awards. Virr’s book is well-researched, and it does not shy away from presenting well-informed Jewish content.