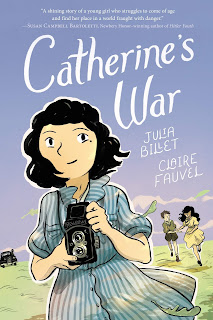 Set in 1942 France, Catherine’s War tells the story of Rachel Cohen, a student at the Sèvres Children’s Home outside of Paris. Rachel loves her school and teachers, and it is at Sèvres that she discovers a passion for photography. But as the Nazis’ grip on France tightens, Rachel is forced to change her name to Catherine Colin and flee. Armed with nothing but her camera, Catherine moves from hiding place to hiding place. Along the way, she chronicles both the chilling transformation of her country under Nazi occupation and the bravery of everyday heroes on her journey. This graphic novel is based on the wartime experiences of author Julia Billet’s mother, with lovely, expressive illustrations by artist Claire Fauvel. Fauvel uses a muted palette of browns, greens, and grays to emphasize the fatiguing nature of Catherine’s life as she must relocate again and again. Also impressive are Fauvel’s black and white ink drawings of Catherine’s photographs, which capture small moments and vivid emotions of the book’s characters. Catherine’s War moves along at a quick clip, and the author doesn’t inform the reader about what is happening in the wider war or how the network of hiding places develops. Individual characters do not stand out in the story. However, Billet infuses the text with displays of remarkable human connection and compassion. The reader may forget the names of Catherine’s saviors, but their courage and nobility, and Catherine’s strength, linger long after her journey ends.

Catherine’s War takes a well-trodden path in children’s literature, the story of an individual Jew during World War II, and breathes new life into the genre. This true story about a Jewish girl hiding with the help of the French Resistance gives voice to a part of the Jewish experience that has not often been told. While the story is based on the memories of Julia Billet’s mother, Billet admits that she “used quite a bit of artistic license” in creating Catherine’s War. Even so, the book realistically depicts France during that time period and is rooted in a deep understanding of the era’s historical context. Both Billet’s and Fauvel’s level of research is apparent in the text’s details and the illustrations’ realism. The intended audience is children ages 8-12, and the book hits that mark well. There is little depiction of violence and Catherine does not face the terror of deportation or concentration camps. Rather, the book’s tension comes from Catherine’s moments of fear and sorrow, all of which are relatable to middle grade children. Catherine’s story is a Jewish story: Catherine is always Rachel beneath her Christian façade. Circumstances were such that she could not be a practicing Jew, but she holds onto her Jewish roots throughout the book. Catherine’s War was initially published as a novel in French, and this graphic novel version of the story has been translated into English from French as well. The book meets all of the criteria used to evaluate books for the Sydney Taylor Book Award.