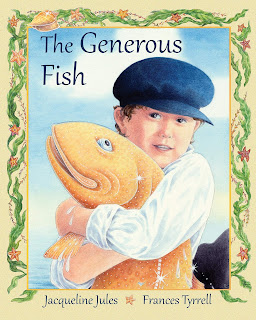 The Generous Fish by Jacqueline Jules, illustrated by Frances Tyrrell

When Reuven follows his father’s advice to cast his bread on the waters, he ends up feeding a fish, who repays him with one of his golden scales. Reuven’s needy neighbors see the golden scale and for scales of their own. The fish gives and gives, until he has only one scale left, and is barely alive. Finally, Reuven tells his neighbors they have taken too much. The neighbors restore the fish to health with soup and honey, and thank Reuven for reminding them that all creatures are important. The message here – not to take too much from nature – is a welcome alternative to The Giving Tree. And it’s great to see this message presented to a general audience in the context of Jewish values.

Jules’ writing is lively, engaging, and age-appropriate. Although Tyrell’s figures are sometimes stiff, the art is a feast for the eyes, especially the inset mini-illustrations and marine-themed borders, which give the pages the feeling of an illuminated manuscript.

This is an appealing picture book about a topic of importance to everyone, Jewish or not. The Generous Fish clearly meets Sydney Taylor Award criteria. The book has clear literary merit, and is appropriate for its intended readership of four-to-eight-year olds. Both text and art are replete with Jewishness. The fish greets Reuven by saying, “Shalom,” and introducing itself as named Nissim – Hebrew for miracles. Other characters are called Abram and Moshe, and the rabbi plays a prominent role. An author’s note ties the story to two Jewish tales, and cites the Torah commandment not to engage is wasteful destruction. (The note also quotes Pope John Paul II). The illustrations show the characters in 19th-century Easter European garb – caps on the men (some with visible tzit-tzit), head scarves and aproned dresses on the women, a rabbi with a long black coat and long white beard. While this Fiddler on the Roof-style depiction does fit with the story’s inspiration in Yiddish culture, it also reinforces the all-too-common notion of what is authentically “Jewish.” 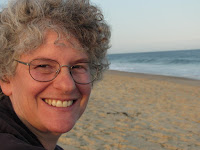 Reviewer Ruth Horowitz's picture books include CRAB MOON, ARE WE STILL FRIENDS? and the forthcoming SAVING ELI'S LIBRARY. In past lives, she has worked as a school librarian, a Torah teacher, and a contributing editor at an alternative weekly newspaper.
Folktale Frances Tyrrell Jacqueline Jules Picture Book Review Ruth Horowitz Wisdom Tales