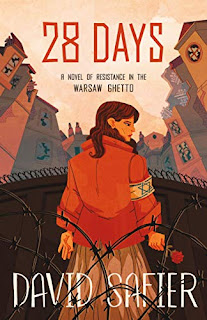 28 Days: A Novel of Resistance in the Warsaw Ghetto by David Safier

In 28 Days, a teenage girl named Mira struggles with everyday life in the Warsaw ghetto and is then thrust into conflict when the Nazis send most of the ghetto’s residents to concentration camps. Initially, her biggest problems are finding food for her family and deciding whether she’s really in love with her boyfriend, Daniel. A surprise encounter with a stranger, a boy who kisses her to save her from local anti-Semites while she’s on a smuggling mission, leads her to question her relationship and to give more thought to whether she should join the growing resistance movement.

Mira is initially skeptical that the resistance is necessary; she, like many in her community, believes they all just need to wait for the world to realize how much injustice is occurring. But when the ghetto’s resettlement begins, she finds herself with fewer and fewer options, especially after she suffers even more loss. At this point, she rejoins the movement and the titular 28 days begin.

Different readers will, I’m sure, have different reactions to this book based on their own reading preferences. In the interest of being straightforward, I’ve found that over decades of reading Holocaust novels, I’ve developed a certain fatigue with familiar narratives. It’s sad to say that we can become inured to reading about these horrors, but we can, and while it’s important not to forget them, I often worry that when we focus on the familiar, we permit a kind of acclimation. For Holocaust novels to give me the sense of urgency and horror they warrant, I need to learn new things.

David Safier’s endnote suggests that he learned much of what he presents in this novel from his family, along with other research, and there are some individual moments in the novel that provided new information about what it might have been like to be a teenager during this time period. There’s a frankness about sexuality and prostitution that I haven’t seen often, as well as graphic descriptions of some of the violence and loss the young resistance members encountered.

Overall, however, the narrative feels familiar. We know that Mira will survive because this is first-person past-tense narration; we know that few others will survive with her because of history. Any other freshness or novelty would have to come from either depth of research or depth of characterization, and while there is some indication of research here, Mira as a character is not quite as compelling as I would like. The writing has an almost middle-grade feel, which may stem from the translation (the book was originally published in German in 2014) but which comes across as reflective of Mira herself, and some contemporary and/or clichéd phrasing was jarring (characters being blown to bits, for example).

28 Days technically satisfies some of the criteria to be considered for the Sydney Taylor award in that it has authentic Jewish content and convincing research and was professionally published in English. I believe there will likely be books that are more impressive at the technical level and that read more appropriately for the age category. 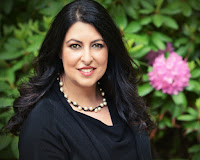 Reviewer Michelle Falkoff is the author of the young adult novels Playlist for the Dead, Pushing Perfect, Questions I Want to Ask You, and How to Pack for the End of the World. She is a graduate of the Iowa Writers’ Workshop and currently serves as Director of Communication and Legal Reasoning at Northwestern Pritzker School of Law.