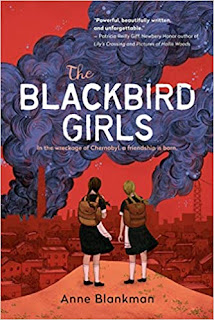 The Blackbird Girls by Anne Blankman

On an April morning in 1986, Valentina Kaplan and Oksana Savchenko wake up in Pripyat, Ukraine, to a red sky full of blue smoke. Neither of their fathers have come home from the overnight shift at the nearby V. I. Lenin Nuclear Power Plant, better known as Chernobyl. Within a few days, the twelve-year-old girls are evacuated to Leningrad. Oksana is angry and afraid, not least because her father has always told her that Jews are liars and thieves, and Valentina’s family is Jewish. Valentina is resentful that her mother is sending her away to a grandmother she has never met, with a girl who has bullied her for years as company.

On an August morning in 1941, Rifka Friedman flees her Kiev home with only an older cousin and the few things they can carry, racing to escape the invading German forces. Her mother and three little brothers remain behind, and she can only hope that she will see them again.

Chapters from Rifka’s perspective are occasionally interspersed among chapters that otherwise alternate between Valentina and Oksana. This triple narrative moves the reader back and forth in time, giving both insider and outsider views of the life of a Jewish family in the Soviet Union. All three experience tragic losses and discover unexpected allies as their separate stories intertwine.

This book covers territory rarely explored in children’s literature: Valentina, a Soviet Jew in the Ukraine in the 1980s, is a singular figure. Born in Siberia, raised without practicing religious rituals, she is just beginning to understand how and why she will always be treated as an outsider. Oksana experiences painful realizations of her own, gradually learning to accept that the authority figures she has obeyed without question might be wrong. Rifka’s journey from her home in Kiev and her life afterward stands out among stories of Jewish children during the second World War.

The horrors of war and the aftermath of the Chernobyl disaster are presented realistically, but appropriately for the upper end of the intended middle-grade audience. In an Author’s Note, Blankman shares the story of her friend Victoria, a survivor of the Chernobyl disaster whose experience inspired the novel. A bibliography of suggested further reading on life in the Soviet Union in both the 1940s and 1980s is also included in the back matter. A sensitive depiction of friendship and family under terrible conditions, set in an rarely depicted time and place for children’s literature, this should be a strong contender for the Sydney Taylor Award.