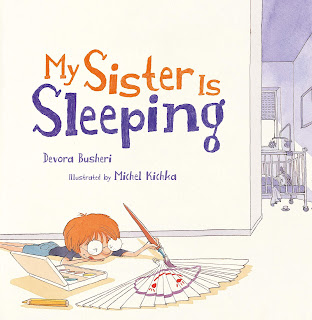 My Sister is Sleeping by Devora Busheri, illustrated by Michel Kichka

My Sister is Sleeping is a quick picture book tale of an older sister waiting for her younger sister to wake up from a nap. The older sister spends nap time describing the younger sister’s various characteristics and activities while she draws or paints portraits of her life with her sister. She anticipates holding her sister in her lap, feeding her oatmeal, and taking her for a walk in a stroller. While the story was originally published in Hebrew, it is not particularly Jewish or uniquely Israeli.

The text on each page is simple, allowing the illustrations to really shine. The book’s artwork was created by Michel Kichka, a highly regarded Israeli cartoonist. Each scene is incredibly detailed and a charming combination of Kichka’s style as well as how he imagines a young child might draw. The last spread in the book is especially nice and depicts the mother hugging the older of her two daughters in front of a wall displaying the girl’s drawings.

In an effort to keep a taste of the book’s original Hebrew, each page has a Hebrew word transliterated into English. I usually enjoy it when Jewish picture books incorporate Hebrew words, however, I think many children who aren’t at least semi-fluent in Hebrew will be frustrated by how it was handled in this book. For example, the first page introduces the Hebrew word for little sister: “My little sister, achoti, is sleeping.” Many American children will know that sister is “achot” but may not recognize the variation “achoti.” Several Hebrew words in the book are plural versions of words that would be more recognizable in their singular form. Others are words that aren’t particularly interesting to the target audience, like “agala” for stroller. The net effect is mildly confusing to the listening audience.

All in all, My Sister is Sleeping is an enjoyable, brief read (just 151 words on 24 pages). It is best suited to preschool-aged audiences, and is especially relatable for newly minted big sisters and brothers.

I do not believe this book meets the criteria. There is no Jewish content except for the sprinkling of Hebrew words transliterated into English. I also think this book should have been published as a board book, not a picture book. The story is too simple to hold the interest of children in the book's target age range (3-8). 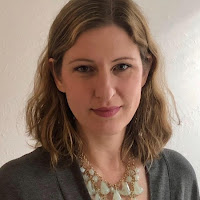 Reviewer Fern Richardson is a bibliophilic Jewish mom living outside of Philadelphia, PA. During the week, she works in marketing but secretly dreams of being a kindergarten teacher. Alas, she earned her degrees in art from California State University, Northridge, and law from Chapman University School of Law, so teaching other people’s children is not likely at this point. Fern is an avid gardener and authored the book Small-Space Container Gardens for city-dwellers hoping to garden on their porch, patio, or balcony.