Review: The Boy Who Thought Outside The Box: The Story of Video Game Inventor Ralph Baer 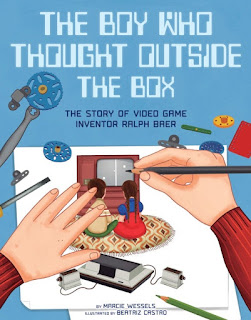 The Boy Who Thought Outside The Box: The story of Video Game Inventor Ralph Baer by Marcie Wessels , illustrated by Beatriz Castro

A picture book biography that traces the life of Ralph Baer from his childhood in Cologne, Germany to his adult life in New York where he becomes the “Father of Video Games.” But such a journey is never easy. Once he is forbidden from attending school because he is Jewish, Ralph is determined to learn English, which helps his family escape Nazi Germany in 1938. His childhood fascination with gears and construction, and the emergence of radio and television sets him on a path towards electrotonic engineering. Long before anyone thinks of using a television for playing a game, Ralph and a team of engineers build the first TV game system. Unfortunately, no company wants to support it. Ralph never gives up. Magnavox’s Odyssey is the first game system sold in 1972, “forever chang[ing] the way we play.”
The Boy Who thought Outside the Box is a gallant effort to tell the little-known biography of the man who invented gaming. It is proof of the persistence, creativity, and audacity needed to leave one life and begin again in a new country. 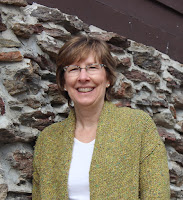