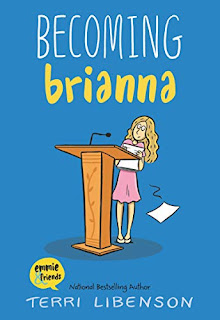 Becoming Brianna is the fourth book in author/illustrator Terri Libenson’s Emmie & Friends series and the first book of the series to focus solely on a Jewish main character. The book opens with a prologue: 13-year-old Brianna nervously steps out from behind a curtain for some kind of performance. She’s so anxious, in fact, that she imagines herself tied to railroad tracks as a train approaches. Brianna’s bat mitzvah ceremony is about to begin. From there, narrator Brianna moves eight months back in time and chronicles her harrowing friendship struggles, overwhelming bat mitzvah preparations, and bickering divorced parents, all leading up to that moment behind the curtain. Interspersed with these chapters are scenes from the bat mitzvah day itself, told through comic-like illustrations of Brianna panicking about forgetting her Hebrew and screwing up her speech. Not quite a graphic novel, Becoming Brianna is a heavily illustrated book that middle grade readers will be able to navigate with ease. Brianna is everything a middle schooler could want in a narrator: she’s honest, smart, awkward, and totally relatable. She’s not sure she wants to have a bat mitzvah at first, but she’s proud and relieved once it’s over. She causes a falling out with her best friend, but when they make up, Brianna values their friendship even more. With Becoming Brianna, Libenson gives her fans a spot-on depiction of the weird, funny, sharp wisdom of a truly likable middle school girl.

Becoming Brianna is a conventional story of a typical tween girl who happens to be Jewish. The predicaments in which Brianna finds herself are those of many kids her age, and the book deals with the topic of the bat mitzvah on a fairly superficial level. Brianna doesn’t spend much time thinking about Judaism and whether she believes in its tenets. The bat mitzvah aspect of the story is more of a way to explore adolescent concerns. Libenson hedges her bets a bit by making Brianna half-Jewish, so she’s not surrounded by Jewish culture and traditions all the time. Any Jewish content is mostly positive, other than the fact that Brianna’s mother, the Jewish parent, is portrayed as rather pushy, while her non-Jewish father is much more laid back. Where Becoming Brianna shines is in its identification with the mindset, references, and language of today’s middle schoolers. Brianna’s school life and personal life brim with authenticity. Perhaps Libenson chose to make Brianna half-Jewish to more accurately reflect the growing population of American kids being raised in mixed-religion households. In any case, the book directly hits its target audience of 8-12-year-olds. The mix of witty text and keenly observed illustrations makes Becoming Brianna relevant to non-Jewish and Jewish children alike. 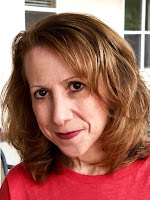