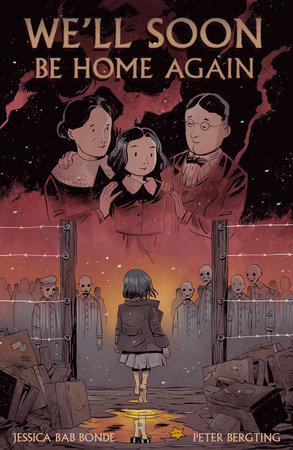 Billed as a graphic novel, it’s hard to categorize WE’LL SOON BE HOME AGAIN by Jessica Bab Bonde and Peter Bergting. Published to critical acclaim in Sweden in 2018 and now published in the US by Dark Horse Comics, with translation by Bab Bonde and Sunshine Barbito, WE’LL SOON BE HOME AGAIN is a slim volume that tells the testimonies of six Holocaust survivors in graphic format. But its spare presentation packs a punch.

Tobias, Livia, Selma, Susanna, Emerich and Elisabeth were all children when WWII and the Nazis cast their tentacles over their lives. As it says in the excellent foreword, the point of the book is that these children started out like “you and me”—possibly better—born into safety and comfort. And while the horrific results of racism and antisemitism were taking place, too many people “looked the other way and were happy as long as nothing happened to them or their families.” And these things can happen again—“to you and me and to our families”— if we are not careful with the freedom we have today.

In some ways, WE’LL SOON BE HOME AGAIN is the same story told over and over again: deaths of family members, starvation, cattle cars, concentration camps, separations, luck of survival, living skeletons, cruelty, typhus, death marches—and love and the ability to rebuild life despite the trauma and stolen years. Each person’s story is very short; years of horror boiled down to their very basics. Without a lot of emotion in the text, or even dialogue, some small details like the loss of a beloved bicycle or radio, or a six-year-old child sitting alone in a ghetto attic for “one month and twenty days” don’t need further explanation to make a strong impact. Bergting’s graphics give a deeper narration, a companion of illustrations and further storytelling for what cannot be described in words. The colors are chosen carefully—muted blues, browns and grays for the ghetto and concentration camps—pops of color for gunfire and flags of liberating armies, as well as for life after Liberation; white for the Swedish Red Cross and early life in Sweden.

I think six children’s stories was the right number: it’s enough to see the range of experience—rich, poor, Poland, Hungary, Czechoslovakia, Romania—to drive home the point that it wasn’t for any exceptional reason or fault that these children endured such trauma—that it literally could happen to “you or me”— without the reader becoming inured and numbed.

After each testimonial is a brief recap of what happened to the child—marriage, children, grandchildren, great grandchildren, and an imperative to retell their survival story—that left me yearning for more. In general I was left with questions to which Google searches did not turn up answers. I found an interview with Jessica Bab Bonde that made me desperately wish I understood Swedish. I am curious if Bergting drew his child characters from photographs or if he met them and envisioned how they might have looked as children; or if the graphics of their characters are from his imagination. I am curious about the project in general—how Bab Bonde came to it and if she interviewed the survivors or based her text on written testimonials (as the majority of the characters/subjects are Holocaust educators in Sweden.) Are the characters still alive? And can we discuss the title?

WE’LL SOON BE HOME AGAIN meets the Sydney Taylor Book Award criteria with literary merit, positive and authentic Jewish content and is solidly rooted in authentic and accurate detail. A map of Europe during WWII, foreword, timeline and glossary add important context. The book is listed as YA but I would recommend it to ages nine to adult, if parents are okay with children on the younger end of this range’s Holocaust education extending beyond the concentration camps gates (per elementary school curriculum guidelines.) My nine- and eleven-year-old sons read it out of the delivery box before I even realized it had arrived. When I found out, I was concerned about the material, especially as the book is listed as YA, but was fine with it—and happy for them to have had this particular introduction—once I read it for myself. 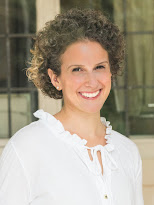 Reviewer Meira Drazin’s debut middle grade novel HONEY AND ME was the recipient of the 2016 Sydney Taylor Manuscript Award and is forthcoming from Scholastic Press. She reads widely in many genres, but in particular middle grade and YA, and she is a strong advocate for Jewish education, both formal and informal. She has been a freelance writer for Jewish media and parenting magazines and has an MA in English and Comparative Literature. Originally from Toronto, Meira lived in New York for many years and now lives in London with her husband and four children. She blogs about middle grade books and publishing at https://fromthemixedupfiles.com.
Dark Horse Books graphic novel Holocaust Jessica Bab Bonde Meira Drazin Peter Bergting Review Young Adult