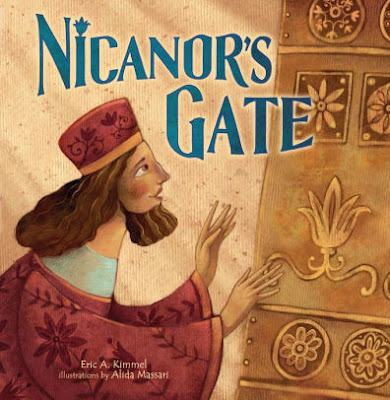 Nicanor's Gate by Eric A. Kimmel, illustrated by Alida Massari

Nicanor’s Gate by Eric Kimmel was first published by The Jewish Publication Society in 1979 with illustrations by Jerry Joyner (1938-2019). The undersized 7x7 inch trim had lengthy, dense text in a small font on the right side of each page along with a framed two color black and blue, difficult-to-decipher illustration on the right. It’s no wonder the book hasn’t circulated from my synagogue library since 1990! Fortunately, Eric Kimmel has penned a new, more accessible version of this wonderful, ancient Talmudic tale with lush, radiant full-color, full spread illustrations in earth tones, blues, and pinks by Alida Massari (Under the Sabbath Lamp, 2017). The simple, clear, and concise text tells the story of the wealthy merchant from Alexandria who volunteers to commission new gates for the ruined Temple in Jerusalem. But when the ship carrying Nicanor and his gates encounters a violent storm, the sailors are forced to throw one gate overboard. Nicanor is devastated when he arrives in Jerusalem and is only able to present King Herod with one gate. However, a miracle occurs when the lost gate washes ashore and is installed along with its mate at the Eastern Gate of the Temple to be known forever more as the Gate of Nicanor. A PJ Library selection, pair with other stories about the Temple such as One City, Two Brothers by Chris Smith (2007) and The World Needs Beautiful Things by Leah Rachel Berkowitz (2018), or use as a precursor to the Hanukkah story and a way to discuss miracles.

This book meets all of the criteria for the Sydney Taylor Book Award.

A synagogue librarian since 1997, reviewer Rachel Kamin is currently the Director of the Cultural & Learning Center at North Suburban Synagogue Beth El in Highland Park, Illinois. She served as chair of the Sydney Taylor Book Award Committee and as the Book Review Editor for Children & Teens for AJL Reviews. She authors articles and reviews for BookLinks, The Jewish Book Council, Judaica Librarianship, Library Journal, and School Library Journal. She contributed a chapter on children’s books to The Tot Shabbat Handbook: A Practical Guide for Engaging Young Families in Congregational Life edited by Paula Feldstein (URJ Press, 2010) and co-authored a chapter on Jewish children’s literature for a forthcoming book on diversity in non-fiction for the National Council of Teachers of English.