Review: Sarah Bernhardt: The Divine and Dazzling Life of the World’s First Superstar 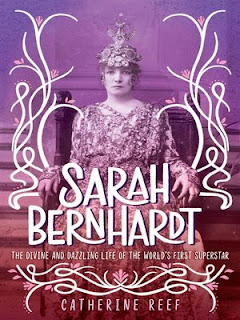 Sarah Bernhardt: The Divine and Dazzling Life of the World's First Superstar by Catherine Reef

Actress, artist, author, mother, world traveller, French patriot: the “Divine Sarah” played many roles, both on and off the stage. Her life was filled with dramatic episodes, which Reef presents in rich detail while also acknowledging that both the loss of historical records and Bernhardt’s tendency to embellish her own stories make some of those details difficult to verify. For example, “Sarah Bernhardt said that she was born on October 22, 1844, and maybe she was. A fire destroyed her birth certificate, so she can only be taken at her word.”

The nineteenth-century world in which Bernhardt rose to fame contains many aspects that may be unfamiliar to twenty-first-century teens. From the demimonde and courtesans to the Franco-Prussian War, Reef’s narrative provides historical context for Bernhardt’s experiences. Photographs and illustrations complement the text, including many images of Bernhardt in costume for various productions. The included bibliography shows the range of research that went into the book and will be appreciated by readers who want to delve deeper into the actress’s life.

Bernhardt’s Jewish heritage is mentioned several times in the course of the biography. Her mother was “born into a Jewish family in the Netherlands” before moving to Paris as a teenager. Reef notes that though the actress was baptized a Catholic at age 11, while she was a student at Notre-Dame du Grandchamp, she was the target of anti-Semitic slurs after becoming famous, and she would later explicitly claim her Jewish identity. In a chapter discussing the Dreyfus affair and the rift it created between Bernhardt and her son, Reef writes, “Sarah insisted that Maurice be loyal to his own Jewish heritage. As for herself, ‘I am a daughter of the great Jewish race,’ she proclaimed. She had never practiced Judaism and still called herself a Catholic, but she felt linked by blood to the Jewish people.”

This is a riveting biography of a fascinating figure, and it fulfills the award criteria. It has literary merit and positive and authentic Jewish cultural content. The style, vocabulary, format, and illustrations are appropriate - and appealing - to the intended grade level. The author’s research is clear, and the details are as authentic and accurate as possible, given the existing material.

Beth L. Gallego grew up outside Chicago, earned her Master’s degree in Library and Information Science at the University of Illinois, and promptly moved to sunny Southern California, where she has been a Librarian since 2002.
Beth L. Gallego Biography Catherine Reef Clarion Books Review Young Adult