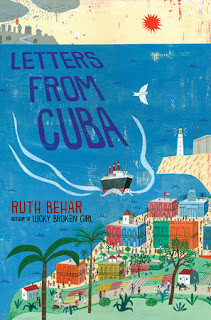 Letters from Cuba by Ruth Behar

It is January 1938 and 12-year-old Esther leaves behind her mother, brothers and beloved sister Malka in their small town in Poland—where things are getting increasingly harder for Jews—to board a ship to Cuba. There she will join her father and help him earn enough money to (hopefully soon) bring the rest of the family. Esther promises her sister that she will write to her and tell her everything that happens and so proceeds Pura Belpré award-winning author Ruth Behar’s newest middle grade novel, Letters From Cuba. Although the Jewish community is in Havana, Esther’s father has taken up residence in a tiny village called Agramonte from which he can peddle his wares throughout the countryside, making the journey to Havana only when he needs to restock. Soon, through Esther’s resourcefulness and talents, including as a deft and creative dressmaker, they are able to earn more and more money until they can buy the family’s steamship tickets. But it’s Esther’s talent for positivity, seeing the good in people, making disparate friends and bringing people together that shines as bright as the heavy gold watch she is gifted in thanks for a kindness that for her is simply a modus operandi.

One’s heart is with Esther right from the beginning; although, mature and accomplished beyond her years, it can be hard to relate to her as a 12-year-old. And despite the backdrop of the very real threat of Nazi-darkening Poland and the desperation to get the family out, as well as the insidious reach of Nazi ideology even across the ocean in Cuba, the story in general can feel sugar-sweet, like the sugarcane plantations outside Agramonte. In fact, Esther is almost an allegorical role and Letters From Cuba has a fairy tale, mythical quality to it with good guys and one bad guy. Exotic Cuba however, feels like its own character living and breathing, holding its own emotional weight. The literary heart of the novel is in the descriptions of Cuba and Cuban life, and—fittingly for an author who is a professor of anthropology—in the meeting of different cultures, religions and ethnicities in the tiny outpost of Agramonte. Jewish holidays and practices are beautifully rendered, in particular how they adapt and take root in Cuba both within the Jewish community and how Esther and her father celebrate with their non-Jewish neighbours—for example when Esther invites her friends (black, Chinese and white) from Agramonte to a Passover seder in which they serve matza with guava paste, and (due to paucity and resourcefulness) bananas from the trees surrounding them as the main dish.

Based on Ruth Behar’s grandmother’s experience of helping her great-grandfather bring their family from Poland to Cuba on the eve of the Holocaust, Letters From Cuba has literary merit (Esther’s letters are filled with beautiful metaphors,) is meticulously researched (from Behar’s family artefacts, Cuban history and cultural anthropology) and gives context of who lived in Agramonte during the time Ruth Behar’s grandmother lived there, widening the novel from being only Euro/white-centric.

Letters From Cuba meets all the criteria for the Sydney Taylor Book Award and is especially notable due to its lush and evocatively portrayed setting that demonstrates the broad diversity of the Jewish experience. Readers young and old might find themselves mesmerized by the sights and smells of a country, time period, culture and experience not often portrayed in children’s literature, nor in Jewish or American literature in general.

Reviewer Meira Drazin’s debut middle grade novel HONEY AND ME was the recipient of the 2016 Sydney Taylor Manuscript Award and is forthcoming from Scholastic Press. She reads widely in many genres, but in particular middle grade and YA, and she is a strong advocate for Jewish education, both formal and informal. She has been a freelance writer for Jewish media and parenting magazines and has an MA in English and Comparative Literature. Originally from Toronto, Meira lived in New York for many years and now lives in London with her husband and four children. She blogs about middle grade books and publishing at https://fromthemixedupfiles.com/.
Meira Drazin Middle Grade Penguin Random House Review Ruth Behar