Review: A Place at the Table 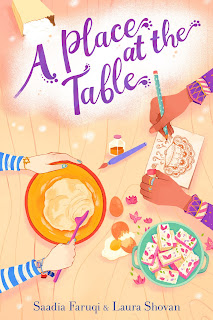 A Place at the Table by Saadia Faruqi and Laura Shovan

A Place at the Table by Saadia Faruqi and Laura Shovan is about sixth-graders Sara and Elizabeth who bridge their outward differences to team up for cooking club and ultimately for friendship. Sara has just joined the large local Poplar Springs Middle School after having gone to a small mosque school her whole life. Looking to earn extra money and supplement her Pakistani cuisine catering business, Sara’s mom Mrs. Hameed becomes the new after-school cooking club teacher, specializing in Southeast Asian food. Elizabeth, enamored by food as well as the practical aspects of cooking for her family when her British mother’s expertise is opening a tin and buying microwavable hot pockets, excitedly takes the after-school club with her best friend Maddy, who promptly ditches her for a new cool best friend. Prickly Sara, who has to sit in the class anyway as she waits for her mom, agrees to be Elizabeth’s partner. Soon the girls inch toward a real friendship, discovering similarities that bond them even among the obvious differences—in particular that they both have mothers who need to study for their citizenship exams to become American citizens. Told in alternating chapters from each girl’s perspective, Sara and Elizabeth’s final recipe for a cross-cultural food competition sounds absolutely delicious and altogether the ending was a truly satisfying dessert.

There is much to admire in A Place at the Table and much that I really enjoyed. Sara’s family is so warm and her relationship with both her parents felt just right. The descriptions overall of her family life rang true and I loved learning what it was like to go to the mosque as well as her religious and cultural traditions. Each girl teaches the other about her religion and traditions, although Elizabeth’s interpretations of some aspects of Jewish life might raise questions for some Jewish readers. For example, Purim is described as a holiday in which everyone dresses up as one of the characters from the Megillah rather than the “endless costume options” of Halloween; and Elizabeth says she’s not allowed to get her ears pierced because she’s Jewish, and that Jewish people don’t get piercings (or tattoos) because you’re not allowed to harm your body. Although there is a traditional taboo against tattoos, in most contemporary Jewish communities any Purim costume absolutely goes and piercing ears is both widespread and permissible.

On Halloween Sara gets cross when Elizabeth asks her to go trick or treating with her; her family does not celebrate Halloween nor allow her to dress up because of the holiday’s pagan roots, and missing out on this American cultural experience highlights Sara’s feeling of always standing out and never quite fitting in. While many Jews do celebrate Halloween now, traditionally they didn’t— and Orthodox Jews still don’t— for the exact same reasons as Sara’s family. Many children—Jewish as well as from other religions or cultures—will relate to Sara’s situation, both specifically and generally. These details show that observance of any religion is widely variable and that neither Jews nor Muslims should be seen as a monolith.

A Place at the Table is appropriate for the intended grade level in style, vocabulary and format. It deals with racism and xenophobia in a sensitive and edifying way and shows a diversity of experience with warmth and empathy. It’s an important cross-cultural middle grade book.

Reviewer Meira Drazin’s debut middle grade novel HONEY AND ME was the recipient of the 2016 Sydney Taylor Manuscript Award and is forthcoming from Scholastic Press. She reads widely in many genres, but in particular middle grade and YA, and she is a strong advocate for Jewish education, both formal and informal. She has been a freelance writer for Jewish media and parenting magazines and has an MA in English and Comparative Literature. Originally from Toronto, Meira lived in New York for many years and now lives in London with her husband and four children. She blogs about middle grade books and publishing at https://fromthemixedupfiles.com.