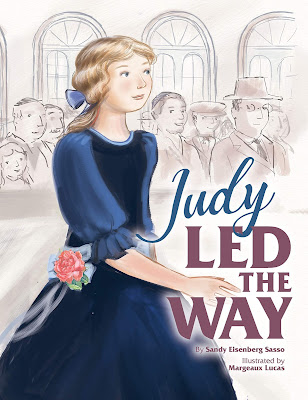 Judy Led the Way tells the story of twelve-year-old Judith Kaplan, the first American girl to publicly become a bat mitzvah. Judy is depicted as intellectually curious—questioning and challenging ideas and practices around her that don’t make sense. One of things she questioned was the marginalized role that women played in the synagogue. Fortunately, her father, Rabbi Mordecai Kaplan, was forward-thinking and offered Judy the opportunity to chant a Torah portion and lead the congregation. But he only gave her a day to prepare. Although Judy was intelligent and talented, she struggled with fears and insecurities surrounding her risky undertaking. Even though the rituals of bar and bat mitzvot are commonplace now, today’s children will be able to relate to her fears; in fact, anyone challenging the status quo will find a realistic and worthy role model in Judy.

The detailed, lovely art by Margeaux Lucas evokes a strong sense of time and place and accurately reflects Orthodox Jewish tradition. The warmth of the illustrations further reinforce the joy that Judy finds in family, music, and Jewish life.

Judy’s love of music is an important through line in the story—music is her safe place and serves as a way for her to soothe herself. The author’s note provides interesting information about Judy’s adult life—she went on to become a musician and pioneer in Jewish music. And on her eighty-second birthday, Judy celebrated her second bat mitzvah.

Judy Led the Way is a well-crafted picture book biography with an appealing subject that children will relate to. Judaism is portrayed in a positive light and as an important part of Judy’s life—in her home and in her synagogue. She does challenge the restrictions that Orthodox Judaism places on women, which leads to her becoming the first girl to help lead a service and chant her Torah portion. She wrestles with finding what G-d means to her.

The text and illustrations furnish accurate and authentic details about life, in general, and Jewish life, in particular, in 1922. The historical element of women winning the right to vote is woven into the story and depicted in the art.

The author is a rabbi herself—in fact, the first female Reconstructionist rabbi. Rabbi Sandy Eisenberg Sasso had a personal relationship with Judy Kaplan and studied with Rabbi Kaplan. While researching this book, Sandy had conversations with Judy’s daughters.

I believe this book meets all the criteria for being considered for the award. 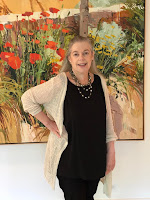 Belinda Brock earned a MS in Literacy and Language from University of Chicago and her background is in teaching and educational publishing. She authored GG and Mamela, the first children’s book to address hospice care. Her essays have been featured on Kveller, Jewish Women’s Archive, and HuffPost. She has a picture book biography being released in 2022.
Apples & Honey Press Belinda Brock Biography Historical Margeaux Lucas Picture Book Review Sandy Eisenberg Sasso