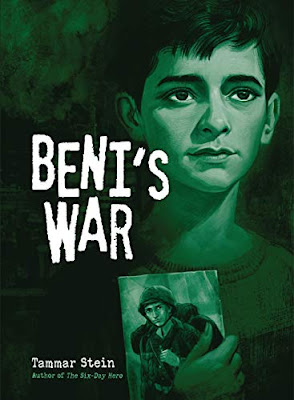 Category: Middle Grade
Admin's Note: The reviewer for this book submitted their notes anonymously, not wishing to be credited because they did not have time to compose a critique that met their own satisfaction. However, in order to assist readers preparing to vote for the Mock Award, we are sharing these impressions of Beni's War with you.

This gripping, intense Upper Middle Grade novel, focused on the experience of an Israeli boy during the Yom Kippur War, is complex, immersive and relatable. Twelve-year old Beni is being bullied in his new neighborhood, a remote collective farm in Israel. His heroic older brother Motti, who is in the army, has to save Beni from a violent beating, as Beni cannot defend himself. Beni wishes he could be like Motti...yet Beni is about to discover his own, quieter brand of heroism. When Israel is invaded by a coalition of Arab nations right in the middle of Yom Kippur, his life changes forever. In a harrowing scene, Beni's community is shelled and destroyed by major firepower from across the border.

Relocated to a safer spot, Beni, his friends and family begin to put their lives back together and wait for developments on the war front. They grow in understanding of each other, the war, and the ways in which each of them can do the right thing, wherever they find themselves. When a truce is signed, however, Beni discovers his soldier brother Motti has been taken prisoner by the Egyptians. And in a moment of magic, Beni performs a small but definitive heroic act of his own, which makes all the difference to his brother...and which shows him that in the faces of enemies, we may sometimes catch sight of ourselves.

The conflicts in the book, both interpersonal and military, are described with the level of detail that will open readers' eyes to the reality of the toll such conflicts take on young lives. While giving the story a breathless dynamism, the violence in the book makes it appropriate for older readers rather than younger Middle Graders.

As for the historical setting and the natural descriptions of an authentic Jewish life in Israel of the 1970's; they are absorbing and enlightening. The author imparts a wealth of knowledge without once making the reader feel "taught."

A book no reader will soon forget.

Note: The reviewer expresses some doubts about the text's suitability for the intended audience, but otherwise finds the book fully eligible for the Sydney Taylor Book Award.