Review: Fish Out of Water 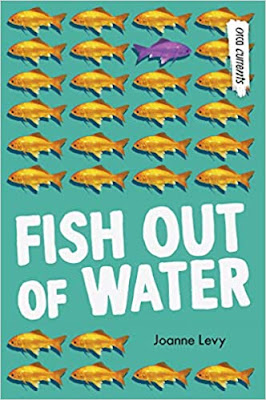 Fish Out of Water by Joanne Levy

Fishel “Fish” Rosen is not a typical twelve-year-old boy. He does not like “typical” boy activities like sports—playing or even watching with his zaida. He doesn’t want to take the water polo class his mom and stepfather sign him up for and really doesn’t want to help his best friend collect used hockey equipment for his mitzvah project. Instead, Fish comes up with his own plan for his mitzvah project. But for his project, Fish must learn how to knit and his bubby won’t teach him, saying “knitting isn’t for boys.” After he joins the school’s Knitting Club, Fish’s friends shut him out and his best friend calls him “weird” and “girly.” After he sneaks into the Seniors' Zumba class at the JCC rather than going to water polo, his stepfather yells at him and then informs him, “Boys don’t cry.” With support from his rabbi and knitting teacher, Fish learns to stand up for himself. Fish’s refusal to adhere to stereotypical gender norms is brave and admirable. He is an advocate for his own rights as well as for girls and women in general.

The book is slight in length but not in substance. It would be a good choice to provoke conversations about gender roles. The length and vocabulary make it suitable for reluctant or younger middle grade readers. Fish is a likeable character with a relatable problem. His adversaries, on the other hand, are less well-rounded; they portray societal norms in a somewhat stereotypical way. Sophisticated readers may find the resolution improbably neat, but it is emotionally satisfying nonetheless.

Fish Out of Water absolutely has literary merit. Levy’s use of a mitzvah project in preparation for a bar mitzvah shines light on the Jewish value of tzedakah. The publisher lists the book as appropriate for ages 9-12. As stated above, given the brevity of the novel and its vocabulary it would be more suitable for reluctant or younger middle grade readers. There is little diversity, as all characters present as white and the setting, though unidentified, presents as North American.

Reviewer Meg Wiviott is the author of the YA novel in verse PAPER HEARTS, which received a 2016 Christopher Award. Her picture book, BENNO AND THE NIGHT OF BROKEN GLASS, was selected as one of SLJ’s Best Picture Books of 2010 and made CCBC’s Best Choice List. She holds an MFA from the Vermont College of Fine Arts.
B'nai Mitzvah Joanne Levy Meg Wiviott Middle Grade Orca Review