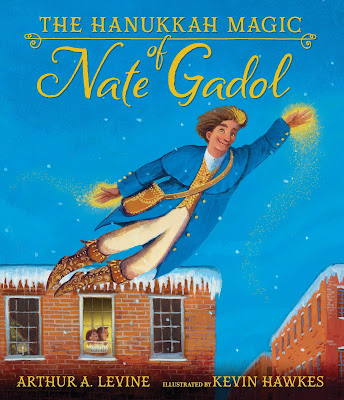 The Hanukkah Magic of Nate Gadol by Arthur A. Levine, illustrated by Kevin Hawkes

As we all know, spinning Hanukkah dreidels isn't just about gleeful shrieking over heaps of shiny chocolate coins. The Hebrew letters on each side of the dreidel represent the beautiful phrase, "Nais Gadol Haya Shum"-- "A great miracle happened there." And from this shining holiday thread of words, coins and miracles, author Arthur A. Levine has spun a Hanukkah tale about a magical giver of gifts with eyes bright as coins, whose name, Nate Gadol, echoes the Hanukkah phrase on our dreidels.

True to his name, (in Hebrew, Nathan Gadol can loosely translate as "a great act of giving"), Nate Gadol appears in the book as a large smiling fellow with an equally large and giving heart. Nate also happens to be a heaven-sent spirit who answers people's prayers by making crucial things last as long as they are desperately needed. Thus readers are invited to entertain the fun and whimsical notion that it was Nate who was sent to help the oil in the Temple burn for eight nights in Israel, resulting in the first Hanukkah, long long ago.

As the story develops, we find that Nate is now helping a poor Jewish American immigrant family during the cold and dreadful winter of 1881. True to their faith and to their loving natures, the Jewish family in turn helps their neighbors, who are poor Irish immigrants. And Nate Gadol extends his powers of...extension to the other family as well, regardless of their different faith.

Then one stormy Hanukkah night, which also happens to be Christmas Eve, Nate Gadol meets another magical fellow: Nick, who's wearing a red suit on a rooftop with reindeer. And Nate suddenly comes up with a gloriously giving Hanukkah idea...

With its engaging premise, lovely language, historical perspective, and imaginative inclusion of certain non-religious aspects of a Christian holiday, THE HANUKKAH MAGIC OF NATE GADOL will appeal to readers of all ages and many backgrounds. Even the informative, personal Author's Note at the end illuminates and deepens the understanding of the reader.

I hope to see THE HANUKKAH MAGIC OF NATE GADOL on the awards lists, for this special work with strong Jewish content deserves a gold circle on its cover.

A story of warmth and beauty that will doubtless become a holiday classic.

Reviewer Bridget Hodder's first Middle Grade novel was THE RAT PRINCE from Macmillan/ Farrar, Straus & Giroux. THE RAT PRINCE was a Children's Choice starred selection, and was shortlisted for the Aslan Award in Children's Fantasy Literature.