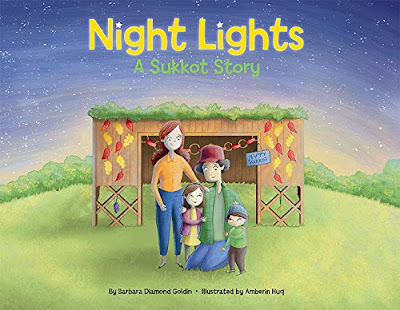 Category: Picture Books
Reviewer: Heidi Rabinowitz
Buy at Bookshop.org
Night Lights was originally published in 1995 by Harcourt Brace with illustrations by Louise August. This new edition, published by Apples & Honey Press, has been heavily edited, and has been reillustrated by Amberin Huq.
The basic storyline remains the same: Daniel is nervous about spending a night in the dark in the family sukkah, even with big sister Naomi for company. After being spooked by noises and shadows, he almost heads inside, but Naomi points out the "night lights" in the sky, the same stars and moon that were seen by their ancestors when they slept in similar huts.
The revised text is much tighter than the original. It's been slightly simplified and streamlined in a way that will make it more accessible to young readers. It's also been made more egalitarian: mom helps build the sukkah and dad helps prep dinner now. August's original illustrations are lovely but very dark and the characters show a lot of negative emotions in their facial expressions. Huq replaces these with gentler, lighter pictures that more clearly show the sukkah itself and that include helpful "flashback" scenes of the ancestors.
The holiday of Sukkot doesn't get much attention from the publishing world, and most existing Sukkot stories focus more on the customs and less on the history, making this title unique. This revision is a worthy addition to any Jewish collection, even those that own the 1995 edition.
Are you interested in reviewing books for The Sydney Taylor Shmooze? Click here!

Reviewer Heidi Rabinowitz is one of the co-admins of The Sydney Taylor Shmooze, along with Susan Kusel and Chava Pinchuck. She hosts The Book of Life Podcast: A Show About Jewish Kidlit (Mostly) at bookoflifepodcast.com. Heidi is Past President of the Association of Jewish Libraries, and Library Director at Congregation B'nai Israel of Boca Raton, Florida.
Amberin Huq Apples & Honey Press Barbara Diamond Goldin Heidi Rabinowitz Picture Book Review Sukkot