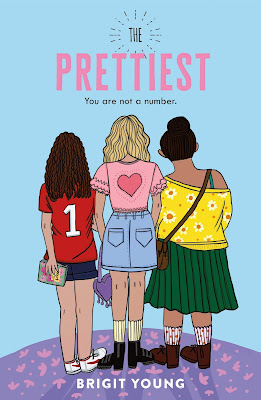 The Prettiest by Brigit Young

The middle school is abuzz when a list is published on social media, ranking the 50 prettiest girls in the eighth grade. Shy Eve is catapulted from obscurity to notoriety by landing in first place on this list, garnering her much unwanted attention. Popular girl Sophie is horrified that's she's been placed in spot #2. Eve's best friend Nessa doesn't make the list at all, presumably because she's not classically thin.

This scenario creates a platform for a fascinating exploration of the ways people judge each other and the assumptions people make about each other, of gender dynamics and sexism, and of other prejudices such as antisemitism and racism (though these last are touched on only briefly). Chapters switch between the points of view of Eve, Nessa, and Sophie, who eventually form an alliance to find the author of the list and bring them to justice, or at least get revenge.

The quick ebb and flow of middle school dynamics is realistically portrayed. The three main characters are well-rounded and sympathetic, and all experience growth during the course of the story. Other characters are bit players, though some show intriguing hints of realism. The complexity of the issues is interestingly explored and not reduced to a simplistic solution, though the author does indulge in the happy ending of giving the girls the supportive community she wishes she'd had at their age, which includes male allies (as per the Author's Note).

Eve Hoffman is Jewish and encounters some casual antisemitism as one of the many flavors of judgement featured in the story. There are a few other mentions of her Jewish experience, such as the contrast between the fall holidays during which she misses school, and Thanksgiving when school is closed for everyone. We also learn that Nessa is Catholic, and that both Eve's and Nessa's moms are quite religious while their fathers are less so. The Jewish content is not a major factor in this story, but does provide an element of mirroring for Jewish readers, and a very small window for other readers.

While the Jewish content is not significant enough to make this book a contender for the Sydney Taylor Book Award, the Jewish representation may be enough to make it a selection for Jewish library collections. The thoughtful exploration of important issues in modern society and the compelling storytelling make this a worthy addition to most general collections.

Reviewer Heidi Rabinowitz is one of the co-admins of The Sydney Taylor Shmooze, along with Susan Kusel and Chava Pinchuck. She hosts The Book of Life Podcast: A Show About Jewish Kidlit (Mostly) at bookoflifepodcast.com. Heidi is Past President of the Association of Jewish Libraries, and Library Director at Congregation B'nai Israel of Boca Raton, Florida.
Brigit Young Heidi Rabinowitz Middle Grade Review Roaring Brook Press