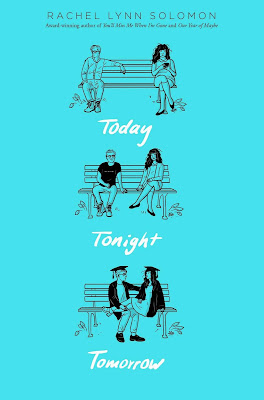 Today Tonight Tomorrow is an enemies-to-lovers contemporary romance that follows two academic rivals on the last day of their senior year of high school. Rowan Roth and Neil McNair have spent much of their high school careers trying to outdo each other for the best grades and accolades. Howl, a senior scavenger hunt spread all across Seattle, is their last chance to outdo one another. However, when Rowan realizes that a group of students wants revenge on the both of them, they put aside their feud for the evening to team up. Over the course of the evening they learn more about each other, and realize that they might actually be a perfect match.

This book was a fun, addictive read. The narrative has a good sense of humor and a sweet romance at its heart. Rowan and Neil’s passions and insecurities feel authentically drawn, and the game element of the plot and the 24-hour timeline keeps things exciting. It's also very Jewish, in sweet and surprising ways. Jewish publishing professionals in particular will be amused by the subplot involving Rowan’s parents, who are children’s book authors writing Jewish chapter books. This, to me, felt like a great book to pair with Netflix’s Never Have I Ever, as it features a similarly fun and sweet story about academic rivalry in high school, all while unpacking some of the Jewish stereotypes featured in the Netflix series.

The book meets the criteria for consideration for a Sydney Taylor award. Both Rowan and Neil are Jewish, and Jewish identity comes up frequently over the course of the text. In addition to the Jewish children’s book subplot, there is a lot of conversation about casual anti-Semitism. Early on, Rowan overhears an anti-Semitic conversation by her peers, and it’s later revealed that part of the reason Neil is so private about his Jewish identity is that he’s been rejected for it before. There is also a sweet and memorable scene over a Shabbat dinner.

The book also portrays diversity in the Jewish experience. Rowan is Jewish and has Mexican heritage. Neil’s family is shown a struggling financially. I was refreshing to see economic diversity and a Jewish character with an immigrant parent, two kinds of Jewish representation that are scarce in Contemporary YA. Rowan and Neil both also have a realistic and positive relationship with Jewish identity. Both characters express insecurities about being Jewish because of the way they are perceived and treated by their peers, not because there’s anything embarrassing about being Jewish. Rowan learning that Neil is Jewish becomes a turning point in the text, the point that Rowan decides to trust Neil, and that she might be in love with him.

Solomon’s book also contains great research and detail about Seattle history that will make anyone wish they could go explore the city themselves. Ultimately, I believe this to be a contender for the award and a must-read for anyone looking for a sweet and romantic escape.

Reviewer A.R. Vishny is a writer, attorney, and occasional television extra based in NYC. Her work has appeared in Alma. Though books will always be her first love, she also has a thing for cake and period dramas, and can be found talking about all that and more at http://twitter.com/AR_Vishny.
A.R.Vishny Rachel Lynn Solomon Review Romance Simon & Schuster Young Adult