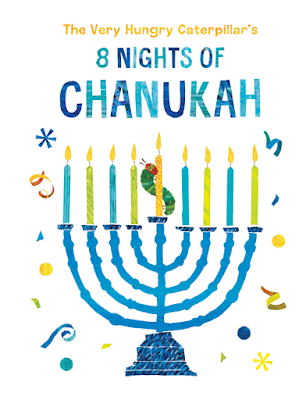 The original Very Hungry Caterpillar by Eric Carle (1969) is a beloved classic of secular children's literature. In recent years, the caterpillar has become something of a franchise, available as a toy, on party supplies, and in a plethora of spin-off books. Now, at long last, we get the intersection of the famed caterpillar with Jewish culture in The Very Hungry Caterpillar's 8 Nights of Chanukah.

Eric Carle's signature style of painted paper collage has been employed on eight spreads, one for each night of Chanukah. On the left side of each spread, we see a menorah correctly depicted with the shamash elevated above the other candles, and with candles being added each night from right to left. On the right side, bright illustrations on a clean white background depict typical holiday activities such as eating latkes and sufganiyot, playing dreidel, and giving gifts. All human characters present as white, and have no visual cues of Jewish identity. The text is extremely basic, and is not a useful introduction for those unfamiliar with Chanukah's history or traditions.

This board book's bright art and familiar caterpillar will appeal to young children, but little effort has gone into creating an interesting or educational narrative. It is always entertaining to see a hat tip to Judaism from well-known characters, yet the lack of substance here renders the book an unlikely candidate for the Sydney Taylor Book Award.

Reviewer Heidi Rabinowitz is one of the co-admins of The Sydney Taylor Shmooze, along with Susan Kusel and Chava Pinchuck. She hosts The Book of Life Podcast: A Show About Jewish Kidlit (Mostly) at bookoflifepodcast.com. Heidi is Past President of the Association of Jewish Libraries, and Library Director at Congregation B'nai Israel of Boca Raton, Florida.
Board Book Eric Carle Hanukkah Heidi Rabinowitz Review World of Eric Carle