Review: The Way Back 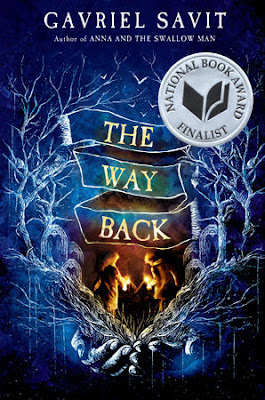 The Way Back by Gavriel Savit

Yehuda Leib and Bluma have lived all their lives in the tiny shtetl of Tupik, somewhere in the woods of eastern Europe. Bluma’s father is a baker, and their home is warm and bright. Yehuda Leib scarcely remembers his father, though all the neighbors shake their heads and sigh when they speak of him. Right now, all anyone can talk about is the Rebbe of Zubinsk, who is about to preside over the wedding of his fifth granddaughter. It is to be a grand celebration, and the invitation is open to anyone who wishes to come.


This interests not only the people of the surrounding villages, but also the creatures who make their home in the Far Country, where time and space are different from the human world. The Far Country is the home of angels and demons, beings like Lilith, Lord Mammon, and the Dark Messenger, who take this rare opportunity of an open invitation to cross into the land of the living.


Bluma and Yehuda Leib both meet the Dark Messenger, and those meetings send them on the road to Zubinsk and on into the Far Country itself, where they will bargain with demons, discover secrets, and fight Death to make their journey back home.


The Way Back is a fantasy adventure that draws deeply on Jewish folklore. Readers unfamiliar with the supernatural figures will still be captivated by them, and sensory details provide a rich sense of atmosphere. Against the backdrop of a fantastic world that feels “long ago and far away,” Bluma and Yehuda Leib are realistic young adults, with flaws and gifts, people in search of home, love, and family.


This book was a 2020 National Book Award finalist in the Young People’s Literature category, and it is a strong contender for the Sydney Taylor Award for Young Adults. Religious and cultural Jewish content are central to the story, with characters drawing on their faith and rituals for power and strength. Dark topics are explored in a manner appropriate for teenage readers. Some readers may also be motivated to learn more about the figures of the Far Country. Fantasy adventure influenced by Jewish tradition is a rare find, and this is a distinguished contribution to the literature.