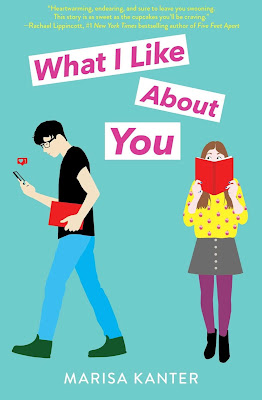 Marisa Kanter’s What I Like About You follows seventeen-year-old Halle, who runs a popular book blog under the pseudonym “Kels” that combines her two loves: young adult literature and cupcakes. Her ability to keep her real life and her online identity separate is put to the test when she starts at a new high school attended by one of her closest online friends: Nash. Nash doesn’t know much about Halle, but he is in love with Kels. At first, Halle decides to hide the truth about her online life from Nash. But as the blog takes off, that secret becomes harder and harder to keep.

Kanter excels at depicting book blogger culture and YA Twitter. The book clearly reads from the perspective of someone who is immersed in and truly understands it. That being said, the book missed a few opportunities to dig deeper. Not exploring how Halle’s privileges and personal connections lend to her success as a teen book blogger in spite of her fake persona feels like a missed opportunity. In addition, while Halle alludes to the possibility of harassment and trolling that comes with being very visible online, that is not actually explored either.

As far as the romantic plot, initially it wasn’t clear what was keeping Halle from telling Nash her secret upfront. However, once the lie starts building, the dilemma makes for great romantic tension. There are also compelling family and friendship subplots that make for a well-developed world and emotional life for Halle.

There are a lot of Jewish characters in the book: both Halle and Nash are Jewish, as is Halle’s family and a friend of Nash’s. Halle describes herself as “culturally Jewish” but has little experience with a lot of Jewish customs. Her grandfather is a member of a Conservative synagogue and a little more observant, so part of the book involves Halle experiencing a lot of holidays and rituals for the first time. Halle attends a Shabbat service at a synagogue, and the text is peppered with references to Rosh Hashanah, Hanukkah, and USY. Halle’s famous documentarian parents, meanwhile, are in Israel making a documentary about Kibbutzim. This functions chiefly as a device to keep Halle’s parents out of the picture for the duration of the novel and isn’t explored in any depth.

While it’s refreshing to see a fun, contemporary YA that incorporates all these Jewish details, I don’t think it’s a contender for the Sydney Taylor. There isn’t evidence of the kind of “scholarship and research by the author” the award looks for. While there is some diversity, with Nash being both Jewish and one-quarter Korean, the affluent suburban setting feels like familiar territory for a contemporary Jewish YA. That being said, it is still a great pick for teen readers looking for a sweet, internet-savvy contemporary romance.

Reviewer A.R. Vishny is a writer, attorney, and occasional television extra based in NYC. Her work has appeared in Alma. Though books will always be her first love, she also has a thing for cake and period dramas, and can be found talking about all that and more at http://twitter.com/AR_Vishny.
A.R.Vishny Marisa Kanter Review Romance Simon & Schuster Young Adult