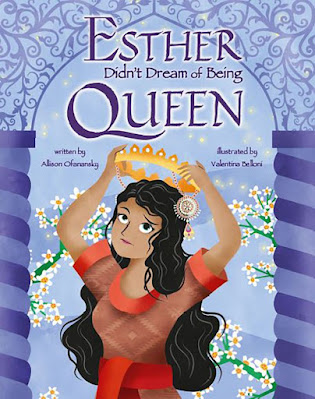 Esther Didn't Dream of Being Queen

Allison Ofanansky gives the familiar story of Esther a not-a-fairy-tale twist. Narrated by Esther, it begins with “Once upon a time,” and goes on to frame the story in the context of Cinderella. Like Cinderella, Esther is an orphan who becomes a queen. But there the similarities end. Esther is happy to live quietly with her cousin Mordecai, gardening and giggling with her friends. She disapproves of the king’s “rowdy parties,” and when word goes out that all pretty young women are to report to the palace for a beauty contest, Esther tries to avoid the order. The king, she states, is not her idea of “prince charming.” When she is eventually forced to appear at the palace, she follows Mordecai’s warning not to reveal her background, but notes that it feels “strange” to hide who she is. She lights Shabbat candles in secret. Later, when Mordecai tells her what Haman (“a real bully”) is plotting, Esther is afraid to approach the king. But she knows she doesn’t have a fairy godmother to solve her problem with magic, and must depend on her own courage and wits.

The writing is lively and age-appropriate, and the art is eye-catching and colorful, in a Disney sort of way – appropriate for an audience presumably immersed in Disney princess culture. Belloni has depicted Esther with black hair and olive skin, and has filled her setting with architectural details such as the Ishtar Gate of Babylon, as well as winged lions, and other Persian motifs.

An author’s note clarifies the connection between Esther and Cinderella, and explicitly states the message about the importance of standing up for what’s right, even if it’s scary or difficult. 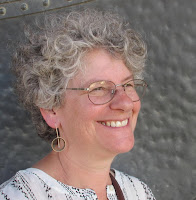 Ruth Horowitz is a writer living in Rhode Island. Her most recent picture book, SAVING ELI'S LIBRARY, came out in October 2020.