Review: Baby Moses in a Basket 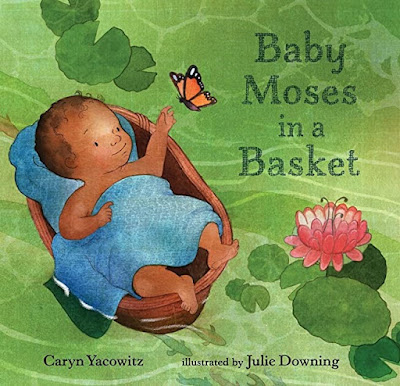 Baby Moses in a Basket

Baby Moses, set adrift in a basket by his mother, floats down the river Nile. An ibis, a hippopotamus, and a crocodile each meet the sleeping baby and, somewhat improbably, take a turn at protecting him through night and rainstorm. In the morning, Pharoah's daughter finds the baby and joyfully draws him out of the water.

The narrative departs from the source material in Exodus beyond the insertion of the protective animals. The basket's journey lasts all night and seems to cover quite a distance. The baby is identified as Moses from the beginning, rather than being named Moses ("I drew him out of the water") by Pharoah's daughter. There is no mention of sister Miriam watching over her little brother and being on hand to offer her mother's nursing services to the princess, who gives no indication that she recognizes him as a Hebrew child. Readers familiar with the original story may be confused, while others will end up misinformed.

The rhyming text is soothing, though the beat falters in a few places. It creates pretty mental images but may go somewhat over the heads of younger listeners. Older readers might appreciate the midrashic expansion of the baby's time on the river Nile. All will enjoy the sweeping illustrations, which are lush and gorgeous; the cinematic perspectives of the Egyptian wildlife  will hold children's attention. Notably, the human characters are all smooth haired with light brown skin.

While not suitable as an accurate introduction to the Torah story, this story acts as an attractive Moses-themed meditation, and may be used to teach the idea of midrash. With no explanatory notes included, the divergence from the original may render this book an inappropriate choice for the Sydney Taylor Book Award.

Reviewer Heidi Rabinowitz is one of the co-admins of The Sydney Taylor Shmooze, along with Susan Kusel and Chava Pinchuck. She hosts The Book of Life Podcast: A Show About Jewish Kidlit (Mostly) at bookoflifepodcast.com. Heidi is Past President of the Association of Jewish Libraries, and Library Director at Congregation B'nai Israel of Boca Raton, Florida.
Bible story Candlewick Caryn Yacowitz Heidi Rabinowitz Julie Downing Passover Picture Book Review