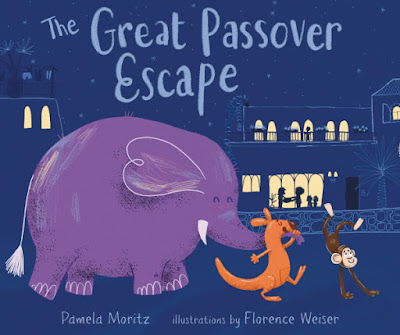 Jerusalem is home to the famed Biblical Zoo, originally conceived as a place for animals named in the Tanach, but expanded to include endangered and other species. Moritz crafts a whimsical, amusing, and sometimes laugh-out-loud Passover story about three creatures in that zoo -- a kangaroo, elephant, and monkey -- who've heard about Passover from their zookeeper, and plot to escape from the zoo and attend a Passover seder. There's a lot of humor in their relative understanding of the holiday. The monkey has the facts right; the kangaroo and elephant, less so. For example, kangaroo and elephant believe that Hashem sent planes and plates, respectively to free the Hebrews from bondage. Weiser's art reflects their misunderstanding, and it's funny to see a passenger jet high above the pyramids. Her illustrations are engaging, colorful, and non-realistic. The story of how the kangaroo and elephant convince the sleep-craving monkey to help them escape at least temporarily from their zoo home makes your like them all. And they realize the parallels to the events of Passover. "'Hey, we did it, we're free!' exclaimed Kang / 'Just like in the Passover story!' said Ellie." Moritz's writing moves the story along smartly, and where they end up for the Passover seder makes excellent sense. Weiser's artwork will give young readers plenty of things to discover, from aardvarks touching noses to the slouch of the tired and exasperated monkey. This book is a lot of fun.

This book meets all Sydney Taylor criteria, with the added bonus of underscoring the geographic spread of world Jewry, with an author from Israel and a Belgian illustrator, as well as the Jerusalem setting. There's plenty of positive authentic Jewish content and the teaching component about the Biblical Zoo is an added plus. Parents and illustrators will be delighted at the convergence of art, animals, and the Passover story, and how Moritz reinforces important Passover symbols like maror, haroset, and the injunction that "all who are hungry, come and eat." The animals surely do. Language level is fine for young readers. Things might get a bit tricky for parents if kids ask, though, in trying to reconcile the idea of a zoo with freedom. So that's a thematic consideration. Overall, though, this is at least a Sydney Taylor Notable contender, and maybe more. 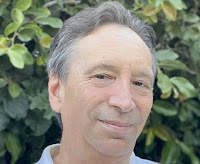 Reviewer Jeff Gottesfeld writes for page, stage, and screen. He has won awards from the American Library Association, the Association of Jewish Libraries, Jewish Book Council, the Writer’s Guild of America,, and the American Alliance for Theater and Education.. His picture books are The Tree in the Courtyard (Knopf, 2016), illustrated by Peter McCarty, No Steps Behind (Creston, 2020), illustrated by Shiella Witanto, and Twenty-One Steps: Guarding the Tomb of the Unknown Soldier (Candlewick Press, 2021), illustrated by Matt Tavares. Raised in Teaneck, New Jersey, he currently resides in Los Angeles. Visit him at www.jeffgottesfeldwriter.com
Florence Weiser Jeff Gottesfeld Kar-Ben Pamela Moritz Passover Picture Book Review