Review: Hold On to Your Music 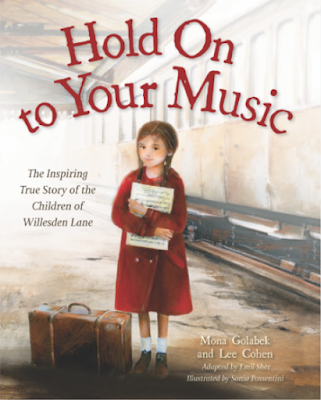 Hold On to Your Music: The Inspiring True Story of the Children of Willesden Lane

On a cold winter day in Vienna, Lisa takes the trolley to her piano lesson, daydreaming about performing Mozart and Beethoven at the symphony hall. When she arrives, her teacher meets her at the door and tells her that the laws have changed, and he can no longer teach Jewish children. At home, Lisa’s parents comfort her, and her mother tells her to “hold on to your music. It will be your best friend.”

She repeats this advice one last time as Lisa boards a train with many other children leaving for Great Britain, where their parents hope they will be safe. After arriving in London, Lisa is placed at a group foster home in Willesden Lane. She makes friends with the other children, and is pleased to find a piano that she is allowed to play. Throughout the war years, Lisa continues to practice, eventually auditioning for and entering the Royal Academy of Music. The story closes with Lisa’s concert debut, during which she imagines her mother by her side.

A letter to the reader from author Mona Golabek - Lisa’s daughter - and a historical note provide further information about both Lisa Jura and the Kindertransport, the “special trains” referred to in the text. The front endpapers are decorated with music notes, and the back endpapers feature photos of the Willesden Lane children, Lisa as a young woman, and baby Lisa with her parents and older sister, Rosie, who is not mentioned in the story.

This picture book is adapted from The Children of Willesden Lane: Beyond the Kindertransport: A Memoir of Music, Love, and Survival (Mona Golabek and Lee Cohen, 2002, Grand Central Publishing), and many details are lost in the change in format. Lisa Jura was a young teenager when she left Austria, but she appears even younger in Sonia Possentini’s pastel and gouache illustrations, and her age is not specified in the narrative. Her older and younger sisters are not present in the portrayal of her family.

These changes create a book that is appropriate for young children, but they also create a book that lacks feeling. After a vague mention of “talk of war in the air”, Lisa’s parents abruptly announce that she will be leaving Vienna to go where “she would be safe and could follow her dream.” After saying good-bye at the train station, there is no mention of Lisa’s parents until the very end, when she imagines speaking to her mother. The bulk of the narrative focuses on Lisa settling in at Willesden Lane, practicing the piano, and becoming the pianist she dreamt of being. It should be an inspirational story, but so much is glossed over that the real heartbreak of Lisa’s situation is absent, and her bittersweet victory lacks the impact it should have. The picture book format does not suit the material; too much must be omitted, leaving a shell of the story that could be told.

The book is beautifully written and richly illustrated, and it portrays the experience of a real Jewish girl, but Judaism plays little role in Lisa’s life on the page. The reader knows that Lisa’s family attends religious services because she thinks about “the friends and parents she saw at synagogue every week” when she is told about the restrictions being placed on Jewish people. Once she arrives in London, there is no mention of Lisa’s faith until she questions whether the Royal Academy of Music would accept “a Jewish refugee” - a question quickly dismissed with, “You’re also a very gifted pianist.” While it is a lovely rendition of an obviously treasured family story, the Jewish content is a kind of afterthought, and the book is not a good contender for the Sydney Taylor Award.