Review: Houdini and Me 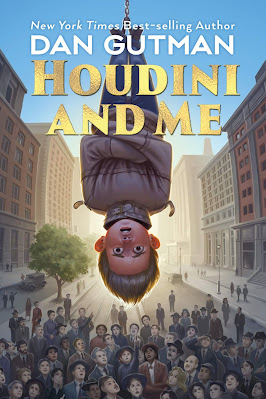 In Dan Gutman’s middle grade novel HOUDINI AND ME, Harry Mancini is just a regular eleven-year-old kid living in New York City. His one claim to fame is that he lives in the same apartment another Harry used to live in: Harry Houdini, famous escape artist. Things begin to get weird though when someone claiming to be Harry Houdini—who died in 1926— starts texting Harry Manicini from an old cell phone. Of course, it must be a prank. But whoever is texting this Harry knows a lot of things only Harry Houdini himself could know—like how to do some of his most famous tricks. So when Harry Houdini gives Harry Mancini a chance to change places and escape his twenty-first century life for an hour, what could go wrong? Only the fact that Harry Mancini soon finds himself in 1921 Kansas City, in a straight jacket, being cranked nine stories into the air by his feet, forced to perform Harry Houdini’s famous escape. And soon it becomes clear that Harry Houdini doesn’t like being dead, and that he might want to change places with Harry Mancini, permanently, whether Harry wants to or not.

HOUDINI AND ME would not be a contender for the Sydney Taylor Book Award as, although there is a brief mention that Harry Houdini, né Erik Weisz, was Jewish, there is no Jewish content in the novel. However, I would recommend it as a fun read—both for Houdini and magic enthusiasts, and for anyone who enjoys a good story. HOUDINI AND ME is a fast-paced, tightly-plotted novel with unfussy language and a strong voice. It contains some lovely messages, especially about getting past fear by confronting it, and how people found hope in their own lives by watching Houdini perform unbelievable feats of escape. It is well-suited to the middle grade audience for which it is intended and would be a particularly good choice for reluctant readers.

Reviewer Meira Drazin’s debut middle grade novel HONEY AND ME was the recipient of the 2016 Sydney Taylor Manuscript Award and is forthcoming from Scholastic Press. She reads widely in many genres, but in particular middle grade and YA, and she is a strong advocate for Jewish education, both formal and informal. She has been a freelance writer for Jewish media and parenting magazines and has an MA in English and Comparative Literature. Originally from Toronto, Meira lived in New York for many years and now lives in London with her husband and four children. She blogs about middle grade books and publishing at https://fromthemixedupfiles.com/.