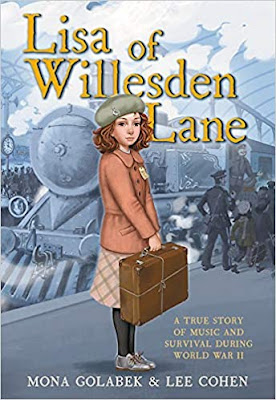 Lisa of Willesden Lane, by Mona Golabek and Lee Cohen, tells a fictionalized account of a young Jewish girl's experiences in World War II England. The main character, Lisa, was one of the children of the Kindertransport. Lisa was also an unusually talented pianist, and the stories of her persistence and triumph with her music form a harmonious counterpoint to the historical background of the story.

Like most Holocaust narratives that can be adapted for children, Lisa's story involved a lot of happiness and triumph. She was able to get her younger sister onto a Kindertransport, and spent the war mostly surrounded by friends who helped her succeed. Hers is the story of a girl who lived in a terrible time, and suffered some devastating losses, but for whom hope and happiness won out in the end.

This book is a young reader's adaptation of an adult book by the same name, written by Lisa's daughter. This version does an admirable job of remaining true to the story. Some harsh and seamy details are left out or softened, but the essence of Lisa's experiences are conveyed intact. This edition also includes brief, factual historical notes related to the Holocaust.

Lisa of Willesden Lane meets the criteria for consideration for a Sydney Taylor Award, as it relates the true experience of a Jewish girl who survived the war in England. Although Lisa's focus is much more on her music than on her faith or culture, her Judaism is an intrinsic part of who she is and forms a constant undertone to the story. And of course, it need not be said that if she were not Jewish, nothing in this book would have happened at all. This is a well-written, engaging book based on an inspiring true story that should be a serious contender for the award. 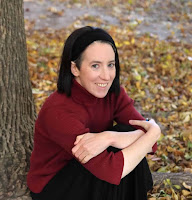 Reviewer Leah Cypess is the author of several mainstream books, including the forthcoming middle-grade novel, THORNWOOD, coming in April 2021 from Delacorte/Random House. Leah also writes Judaica books under the pen name "Leah Sokol." Her most recent Judaica book, YOU CHOOSE: THE SPANISH PLOT, was a PJ Our Way selection in February 2021.