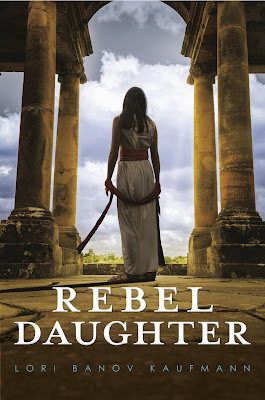 Category: Young Adult
Reviewer: A.R. Vishny
Buy at Bookshop.org
Rebel Daughter follows Esther, the daughter of a priest in the Second Temple, during the Siege of Jerusalem in 70 CE. The novel imagines the life of the young woman memorialized in real life by a two-thousand-year-old tombstone found in Southern Italy, described in the Author’s Note. Esther’s comfortable life in Jerusalem is gradually upended, as factions in the city decide to rebel against Roman authority and those that stand in their way. The fighting culminates with the siege and the destruction of the Temple. Esther is caught up in the conflict, and must survive being sold into slavery in Rome.

There are few examples of Jewish historical fiction in YA that are set outside the 20th century, so the setting in itself was refreshing to see. This book follows in the tradition of The Dovekeepers and The Red Tent in rendering ancient Jewish history from the perspective of a young woman, to generally effective results. The pacing of the novel is rather slow, though this allows Esther’s family life to be developed in depth. It should be said, that despite the romantic subplots, the true love story here is between Esther and Jerusalem. The city is rendered in rich, sensory detail, and the detail is truly the most stand-out feature of this novel.

The book meets the criteria for and is a contender for the Sydney Taylor Book Award. The book leans toward the literary over commercial in its style, and was quite clearly researched in depth. By virtue of its setting and subject matter, it is filled with Jewish content. The author's commitment to rendering life in ancient Jerusalem is truly impressive, including depictions of festivals, food, and social customs. Readers will also appreciate that the novel goes beyond the beaten path of holidays. I believe this was the first time I saw Tu B’Av portrayed in a YA novel. There is also not one but two notes at the end, the first an author’s note describing the ten years of research and work that went into the novel, as well as an additional historical note on the time period by scholar Jonathan J. Price, a professor of history and classics at Tel Aviv University.

Ultimately, this book will appeal to YA readers looking for an in-depth yet accessible depiction of life in first-century Jerusalem. It would pair well with academic coursework on this time period, or (in non-COVID times) a trip to the city itself.

Reviewer A.R. Vishny is a writer, attorney, and occasional television extra based in NYC. Her work has appeared in Alma. Though books will always be her first love, she also has a thing for cake and period dramas, and can be found talking about all that and more at http://twitter.com/AR_Vishny.
A.R.Vishny Delacorte Books for Young Readers Lori Banov Kaufmann Review Young Adult