Review: The Donkey and the Garden 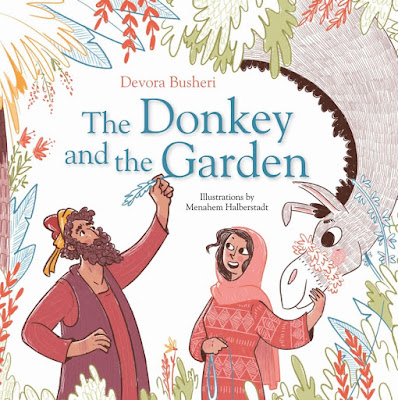 The Donkey and the Garden

Category: Picture Books
Reviewer: Meg Wiviott
Buy at Bookshop.org
This picture book biography of Rabbi Akiva is not a whole-life portrait; it does not follow Akiva from childhood to adolescence and adulthood until he becomes one of Judaism’s greatest scholars, sages, and tannaim. Slightly more tightly focused than Jacqueline Jules' Drop by Drop, it begins in his adulthood, when he is a forty year old, illiterate shepherd. Akiva’s wife, Rachel, is truly the heroine of this story, for she is the one who encourages Akiva to learn to read and write. Akiva wants to, he yearns to, but worries he will never fit in with the children and that people will laugh at him. Instead of pushing him, Rachel plants a garden on a donkey’s back and insists Akiva come to the market with her. The first day, people point at the donkey and laugh. The second day, people still point and laugh. But on the third day, no one laughs or points. Instead they appreciate the garden donkey. “Suddenly, Akiva understood what Rachel had been trying to tell him.” Akiva enrolls in school and learns to read and write and study, “…until finally, he became a true scholar.”

Busheri uses the rule of three expertly, first as Rachel makes her point with the garden donkey, and then to show Akiva’s first days of school. Halberstadt’s simple line drawings are delightful, using color to highlight the center of the story. Busheri uses Akiva’s story to show children, and adults, that one is never too old to learn something new.

THE DONKEY AND THE GARDEN has literary merit. It is well written, positive and authentic, and is appropriate for young readers. The story is solidly rooted and researched. The Midrash HaGadol relating the story is included as an Afterword. Illustrations reflect varying skin tones, clothing, and appropriate for second century Judea.

Meg Wiviott is the author of the YA novel in verse PAPER HEARTS, which received a 2016 Christopher Award. Her picture book, BENNO AND THE NIGHT OF BROKEN GLASS, was selected as one of SLJ’s Best Picture Books of 2010 and made CCBC’s Best Choice List. She holds an MFA from the Vermont College of Fine Arts.