Review: Nicky & Vera: A Quiet Hero of the Holocaust and the Children He Rescued 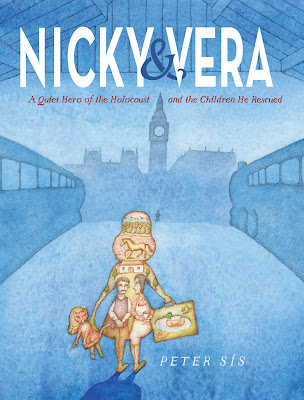 Nicky & Vera: A Quiet Hero of the Holocaust and the Children He Rescued

In December 1938, Nicholas Winton, an English stockbroker, visited a friend in Prague to help hundreds of thousands of refugees, mostly Jewish, who escaped the Nazi invasion of Sudetenland. Knowing that war was coming, time was running out, and something needed to be done, Nicky got started. England would give unaccompanied minors temporary admission, so working out of his hotel room, Nicky worked with desperate parents to arrange safe passage for their children. Returning to England, Nicky continued to work: finding foster families, applying for visas, and making travel arrangements. “Eight trains left Prague in the spring and summer of 1939.” A ninth train carrying 250 more children was stopped at the border on September 1, the day Germany attacked Poland.

Nicky lived a good life, got married, had children, and never told a soul about what he did to save 669 Jewish children. No one knew, until his wife discovered Nicky’s records in the attic. In 1988, Nicky was invited to be part of a popular BBC television program. Unbeknownst to him, the audience was filled with many of the now-grown children he had saved.

Sís’s story of Nicky Winton’s life is told alternatively with that of one of the rescued children, Vera Gissling, as she grew up in a small town outside Prague. The language is simple and gentle when dealing with the horror of war.

Sís’s dream-like illustrations do more than tell half the story, they set the mood. Varying the palettes, blues for Nicky, golds for Vera, and grays for looming shadows of war. Sis uses circles to show pieces of Nicky and Vera’s childhoods and illustrated maps ground the reader in place.

This book oozes literary merit. The story is equal parts horror and joy. It renews one’s faith that humans will do the right thing when the right thing needs to be done. The language, messaging, and illustrations are appropriate for readers of all ages. Keep a tissue handy.

Meg Wiviott is the author of the YA novel in verse PAPER HEARTS, which received a 2016 Christopher Award. Her picture book, BENNO AND THE NIGHT OF BROKEN GLASS, was selected as one of SLJ’s Best Picture Books of 2010 and made CCBC’s Best Choice List. She holds an MFA from the Vermont College of Fine Arts.