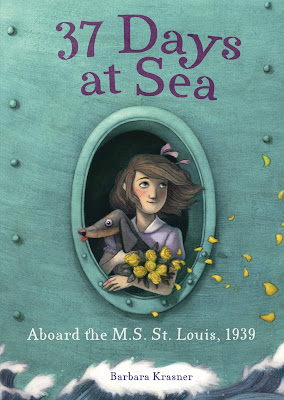 37 Days at Sea: Aboard the M.S. St. Louis, 1939 by Barbara Krasner follows the story of twelve-year-old Ruthie Arons and her family as they leave their home of Germany for a new life in Cuba and hopefully, eventually, the United States. However, when the ship arrives at Cuba, they, along with many of the other passengers, are unable to dock.

Ruthie is an engaging narrator, telling her story in verse/poetry. Like readers today, she loves mysteries and trying to solve them, swimming, and spending time with friends. On the ship, Ruthie befriends a young boy named Wolfie with whom she snoops around the ship, befriends the Captain, and plays games with. Despite the situation going on in their insular world and the world around them, Ruthie and Wolfie manage to have fun. Like the real passengers of the ship, there was a sense of hope as they travelled to Cuba. As the book is told for children, it leaves out some facts that may be upsetting and remains hopeful as Ruthie and her family end up making their way to England.

37 Days at Sea: Aboard the M.S. St. Louis, 1939 is a well-written story of a little-known piece of the Holocaust for today’s readers. Holocaust liteature for children and teenagers often focus on the concentration camps, which is admittedly an important part of history. However, not many know of the M.S. St. Louis. My own grandmother was just 16 when she boarded the ship with her family in hopes of a new life in Cuba and then the United States; as we can see from Krasner’s novel, this was not the end result for many of the passengers. 37 Days at Sea: Aboard the M.S. St. Louis, 1939 breathes new life into Holocaust literature for children with its usage of verse writing and a strong middle grade voice, and I believe would strongly fit the criteria for the Sydney Taylor Book Award as a Notable book. 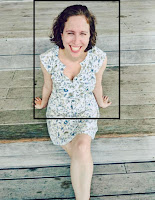 Reviewer Rachel Simon is a youth services library assistant at the Newton Free Library in Newton, MA. She is a member of the Sydney Taylor Manuscript Award committee, and has her Master’s in Library Science and Master’s in Children’s Literature from Simmons University. She is the granddaughter of Holocaust survivors.