Review: I Am Defiance 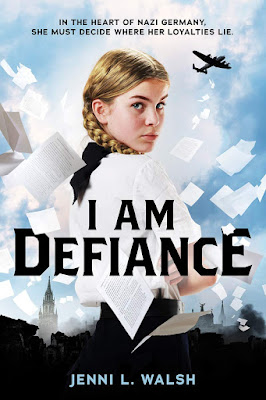 I Am Defiance: A Novel of WWII

This fictional story is narrated in the first person, present by Brigitte Schmidt, a twelve-year-old girl living in Munich in the early 1940s. She goes to Jungmädelbund (Young Girls’ League) (JM) meetings with her best friend Marianne. Their group leader, Elisabeth, encourages the girls to “report” to her, and Brigitte is conflicted. Her older sister Angelika had polio, and she and her father fear that if people notice her limp, she will be sent away. Brigitte often feels this tension of whether she is a “good German” or a good daughter and sister when she does not agree with the anti-Semitic dogma taught at JM meetings. When Angelika has to fulfill her national service requirement by working in a munitions factory in Ulm, she meets the charismatic Sophie, who will be attending university with her. Soon there are more secrets in Brigitte’s house, as her father listens to the radio and Angelika is out with her friends. Then pamphlets arrive at the house encouraging “passive resistance” to the Nazis. As the tension builds, Brigitte realizes that Angelika is involved with White Rose. Their father realizes how dangerous the situation is and makes plans for the family to go to Switzerland, but the Gestapo arrive as they are leaving, and he is taken into custody. The girls escape, but before they flee, they make copies of the last White Rose pamphlet and make sure it is sent out. After World War II ends, their father joins them in Switzerland.

There is minimal Jewish content, no religious or cultural aspects of Judaism, just the anti-Semitic assertions of the Nazis and the family worrying about people who have disappeared. There are some very strong points to the book: Brigitte’s conflict and her growing disillusion with Nazism; the tension that builds as the girls escape from Munich, and the family relationships. Although there is a disclaimer at the front of the book that the book “does not claim to be historically accurate or portray factual events or relationships,” Brigitte has wisdom beyond her age and experience. During that era, she could not have heard or read about anything besides what the Nazis wanted people to know. The title implies that it is a book about resistance, but Brigitte’s one act of defiance comes at the end of the novel. Most readers will have no knowledge of World War II history or White Rose, so a timeline and a map would have been helpful.

Chava (Kathe) Pinchuck worked in private and public libraries in New Jersey before making aliyah in 2012. In Israel she has worked as a cataloger of legal documents and a cybrarian for a distance learning institution. She is a past chair of the Sydney Taylor Book Award Committee, past co-editor of the Children's and YA Book Reviews for AJL News and Reviews, and the current editor of the Jewish Values Finder, a database of Jewish children's books.
[Ed. Note: Chava is one of the co-chairs of The Sydney Taylor Shmooze.]