Review: I Love You, My Dear 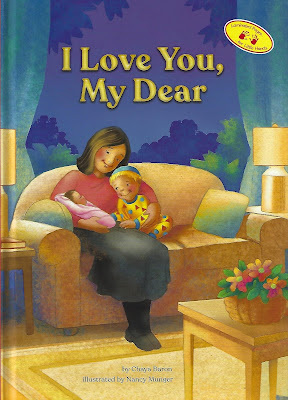 I Love You, My Dear

Category: Picture Books
Reviewer: Jeff Gottesfeld
This book is old-fashioned in its art, Orthodox in its depictions, rhyming in its text, and reverent in its tone toward the arrival of newborns in the world, and the love between traditional parents (and two older siblings) with the baby. As such, it's not for everyone. But for the people for whom it is right, or who are willing to stretch their boundaries a bit and step into a world that might not be their own, it's a winner. There's a glossary at the start for a few terms that might be unfamiliar. Munger's art shows a close Ashkenazi Orthodox family, with enough variance in skin color -- especially in a grandmother -- that it's impossible to code everyone as white. Another nifty art feat, supported by Baron's second-person voice text, is that the new arrival in the family is not named, nor specifically referred to as male or female. The voice is that of a mother toward the baby, and credit to the artist for managing to mix pinks and blues in a way that can make the book work for any baby. It's a smart choice. As for Barons' words, she wraps the arrival of the baby and its early growth in religious significance, putting emphasis on how there's a new Shabbat (which she calls Shabbos, thus centering the specific vein of Judaism in the family) candle lit for the child, as well as on the immense love that the child feels. Each kid is unique, Baron reminds, and in their uniqueness rests possibility. That's a message that any person, of any faith, can get behind.
This is a book shot through with specific Jewish content, from the kippot on all the men, to their tsitsit, to the pushke for charity on a side table, to grandparents arriving for Shabbos with a challah protruding from a shopping bag. Even the mother's and grandmother's hair can be read as wigged -- sheitel, in Yiddish -- which is a great and authentic touch. This author and illustrator know Ashkenazi Orthodox Judaism and share that knowledge. The rhyming text is simple enough for a pre-schooler to hear and enjoy. While the rhymes are predictable, that's probably more an issue for grown-up reader than the kid who'll be hearing this again and again. This is a book that meets all Sydney Taylor Book Award criteria. It won me over.
Are you interested in reviewing books for The Sydney Taylor Shmooze? Click here!

Reviewer Jeff Gottesfeld writes for page, stage, and screen. In recent years he has focused on picture book texts. His NO STEPS BEHIND (Creston, 2020) was a National Jewish Book Award finalist and won the Freeman Medal for the best children's book about Asia. His most recent work is TWENTY-ONE STEPS: GUARDING THE TOMB OF THE UNKNOWN SOLDIER (Candlewick, 2021), with art by Matt Tavares, about which he is speaking at the 100th anniversary of the Tomb in Washington D.C. this November. Visit him at www.jeffgottesfeldwriter.com
Chaya Baron HaChai Jeff Gottesfeld Nancy Munger Orthodox Picture Book Review