Review: I Survived the Nazi Invasion, 1944 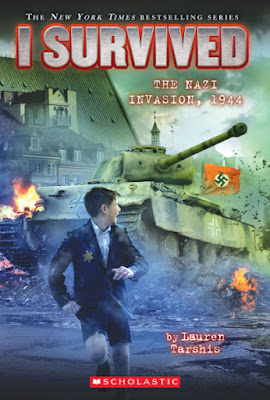 I Survived the Nazi Invasion, 1944

Both the story and the excellent back matter of I SURVIVED THE NAZI INVASION 1944 by Lauren Tarshis inform young readers in an exciting, effective way about a particular facet of the Jewish Holocaust experience. The book explores, from a child's point of view, the complex interaction of Nazi invaders with the local populations (both resisters and collaborators) and the ethical and emotional struggles involved. The text is well-researched and will provide all readers, Jews and non-Jews, with a window into that troubled time.

Tarshis accomplishes all this education almost invisibly, while enthralling kids with an exciting, fast-paced story. This is clearly one good reason her I SURVIVED... books are popular in many classrooms, and this book is no exception. In order to amp up the adrenaline level, the series in general does emphasize the violence of particular episodes in history and the threat of physical harm, but this is signaled clearly in the books' packaging. I SURVIVED THE NAZI INVASION opens with a bombing and includes an "on-screen" killing of a Nazi in the narrative. However, the violence is not gory or glorified, and danger is a legitimate and inseparable part of the historical moments the author has chosen to illuminate for Middle Graders. In addition, the book adds a welcome layer of strong female characters with agency.

This tale follows a Jewish Polish boy, Max, and his little sister Zena, as with a great deal of luck, they escape the Nazis who took away their father, and end up in the forest. Once there, the kids run into their beloved young aunt, who has joined the Resistance. She and her brave associates have just blown up a Nazi train full of grim ammunition, and are being hotly pursued in retaliation. Max and Zena hide out with their aunt and the Resistance fighters in a cleverly hidden island camp, but they are soon discovered, and an all-out Nazi attack including planes, bombs, and bullets results. The main characters survive but are cornered into fighting back...and Max is injured. In a miraculous twist of fate, Max and Zena are then reunited with their father and succeed in riding out the war together. A few years after the war is over, they leave Europe for America, and the tale ends on a note of hope.

The book itself ends with a personal author's note, a Question and Answer section, a useful timeline, and resources for further study. A wonderful way to spark discussion and more learning. Recommended for all kids of an age to understand the topics raised.

Reviewer Bridget Hodder is the author of THE RAT PRINCE from Farrar, Straus & Giroux, a Middle-Grade fantasy "classic" and finalist for the Aslan Award, as well as a starred selection for the International Literacy Association's Children's Choice list. Her upcoming Middle Grade time-travel, THE BUTTON BOX, with themes of shared Sephardic Jewish and Muslim history, is coming in Spring 2022 from Lerner Kar-Ben.