Review: The Many Mysteries of the Finkel Family 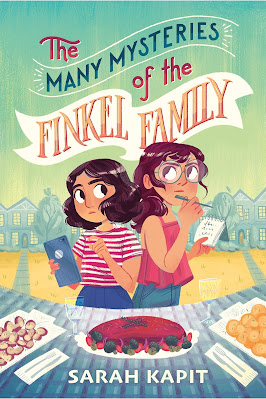 The Many Mysteries of the Finkel Family

Told from alternating perspectives of neurodivergent sisters Lara and Caroline Finkel, THE MANY MYSTERIES OF THE FINKEL FAMILY by Sarah Kapit follows the girls as they begin the new school year as 7th and 6th graders respectively. With her younger sister as her best friend until now, Lara feels protective when Caroline joins her middle school. But Caroline, who speaks through her tablet, wants to be just like any kid making new friends and going to classes, and feels her sister is acting unnecessarily overprotective and, frankly, interfering. But the trouble really begins to take shape when Lara, who has started her own detective agency (FIASCCO—Finkel Investigative Agency Solving Consequential Crimes Only) discovers, along with Caroline, the answer to the mystery of why their father burned the brisket. This distresses both girls and reveals a fissure in the family. While Caroline makes a new friend at school who corrals her into doing things she’s not sure she’s comfortable with, all while resenting Lara’s bossy nosiness into her and everyone else’s life, Lara continues her snooping on all the members of her family—including her two brothers as well as her annoyingly too-perfect cousin from Israel who is living with them. But the biggest mystery Lara cannot solve is what is going on with Caroline, and why their formerly tight relationship is unraveling.

THE MANY MYSTERIES OF THE FINKEL FAMILY should be an exceptionally strong contender for the Sydney Taylor Book Award. It has first-rate literary merit with simple middle-grade-appropriate language that articulates deep and complicated feelings and situations. Its depiction of the Finkel family’s Jewish life feels authentic and is definitely positive —both religiously and culturally, with explanations of things that might be new to some readers striking just the right tone and lightness of touch, and the holidays of Rosh Hashanah and Yom Kippur deftly woven into the plot. Not only does the book demonstrate a broad diversity of the Jewish experience with a mix of Sephardic and Ashkenazi customs and food, but the family also depicts a range of neurodiversity that will be a new window to some readers and a much-needed mirror to others. In fact, I think THE MANY MYSTERIES OF THE FINKEL FAMILY will delight and touch the hearts of all its readers, young and old: it certainly did mine.
Are you interested in reviewing books for The Sydney Taylor Shmooze? Click here!

Reviewer Meira Drazin’s debut middle grade novel HONEY AND ME was the recipient of the 2016 Sydney Taylor Manuscript Award and is forthcoming from Scholastic Press. She reads widely in many genres, but in particular middle grade and YA, and she is a strong advocate for Jewish education, both formal and informal. She has been a freelance writer for Jewish media and parenting magazines and has an MA in English and Comparative Literature. Originally from Toronto, Meira lived in New York for many years and now lives in London with her husband and four children. She blogs about middle grade books and publishing at https://fromthemixedupfiles.com/.
Dial Books Meira Drazin Middle Grade Review Sarah Kapit