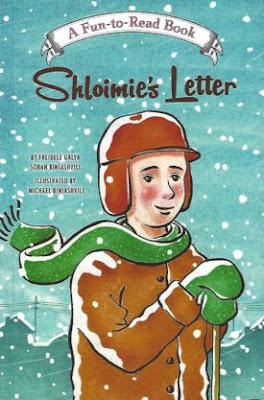 Category: Picture Books
Reviewer: Chava Pinchuck
Buy at Hachai Publishing
An early reader with large text and short chapters, this story is inspired by events in the author's family history. Set in 1946/1947, Shloimie Paporovich and his family live in Toronto. This ten-year-old enjoys playing baseball with his friends, but one day when he pitches, the ball breaks the car window of a neighbor, Mr. Barclay. Shloimie knows that "Gam zu l'tova" - everything is for the good, so he confesses to Mr. Barclay and agrees to do chores to work off the cost of the broken window. His best friend Hershel helps him out, which makes the raking of leaves and snow shoveling go faster. One day Shloimie's family receives a mysterious letter from Sweden. A cousin survived the Holocaust. The Paporovich family would like Leib to move to Canada, but the immigration laws are very strict. As Shloimie worries about his cousin Leib and continues his chores, he wonders how everything can be for the good. When Hershel and Shloimie are talking, Mr. Barclay hears about Leib. Soon the family receives another letter -- Leib has been cleared to immigrate to Canada. How did it happen? Mr. Barclay is an immigration officer, and he was so impressed with Shloimie's dedication to pay off his debt and do the chores, that he knew their relative would also work hard. The illustrations break up the text. Although there are females in the pictures, the illustrations are typical of a book for Orthodox readers: somewhat old-fashioned and static.

Published by Hachai, the book's target audience is Orthodox, so the glossary is probably unnecessary. The book is filled with Jewish religious and cultural content -- kudos for including Jewish holidays and foods. But the post-World War II setting and almost perfect Shloimie may not be relatable for many readers. While the Holocaust is skirted in the text, there are more details in the Author's Note and Historical Note that may be too much for the target audience without parental intervention.

Reviewer Chava (Kathe) Pinchuck worked in private and public libraries in New Jersey before making aliyah in 2012. In Israel she has worked as a cataloger of legal documents and a cybrarian for a distance learning institution. She is a past chair of the Sydney Taylor Book Award Committee, past co-editor of the Children's and YA Book Reviews for AJL News and Reviews, and the current editor of the Jewish Values Finder, a database of Jewish children's books. [Ed. Note: Chava is one of the co-chairs of The Sydney Taylor Shmooze.]