Review: The Sun Will Come Out 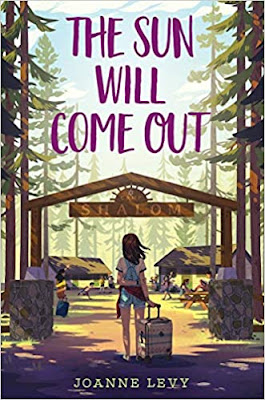 The Sun Will Come Out

Category: Middle Grade
Reviewer: Shirley Reva Vernick
Buy at Bookshop.org
Painfully shy twelve-year-old Bea Gelman can’t wait to attend her first sleepaway summer camp—that is, until her BFF backs out and Bea has to go to Camp Shalom alone. Bea’s social anxiety manifests itself in unsightly hives, which embarrass her in front of her crush and elicit merciless bullying from two mean girls in her cabin. When Bea sprains her ankle and then apparently gets betrayed by her one new friend, she decides to spend the summer in the infirmary. There, she meets Harry, the camp directors’ 13-year-old son, who has the terminal condition progeria. Harry’s strength and positivity inspire Bea to face her own challenges and even to participate in the camp musical production of Annie (hence, the book’s title).
Both humorous and heartwarming, The Sun Will Come Out offers a tightly plotted arc that authentically portrays the emotional lives of preteens, as well as the ups and downs of sleepaway camp and the power of seeking silver linings. It explores mortality, disability and faith but is not heavy-handed. The mean girls are a bit over the top, but this doesn’t disrupt the story. I recommend this book for middle-grade readers, especially girls.
The Sun Will Come Out is a contender for the Sydney Taylor Awards. The novel is filled with Jewish characters inhabiting a popular Jewish setting. Jewish rituals—including Jewish songs, blessings, Shabbat, and bat mitzvah talk—abound. The story explicitly illustrates the Jewish values of ometz lev (courage), kavod (honor, respect), and chesed (kindness) without being didactic. While there is plenty of drama that is not specifically Jewish, the plot is deftly filtered through a Jewish lens.
Are you interested in reviewing books for The Sydney Taylor Shmooze? Click here!

Reviewer Shirley Reva Vernick is a middle grade and young adult novelist. Shirley’s debut novel, The Blood Lie, is a Sydney Taylor honor book and the winner of the Simon Wiesenthal Once Upon A World Book Award. Her Jewish-themed MG novel, RIPPED AWAY, will be published by Regal House Publishing in February 2022.
Joanne Levy Middle Grade Orca Review Shirley Vernick