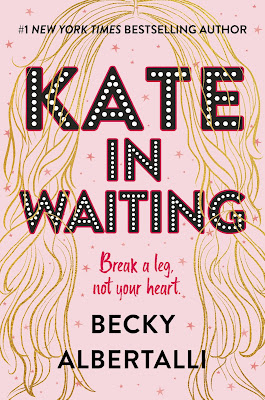 In Becky Albertalli’s newest novel, KATE IN WAITING, theater kid Kate and her talented best friend Anderson always share crushes—it’s only fun when they can pine after the same boy together, dissecting every smile glanced their ways, every infinitesimal interaction, all while secure in the ultimate relationship: their own friendship. But when their theater summer camp crush Matt shows up in their school, things begin to go off-script. Kate feels left out when Andy and Matt both get into an exclusive drama class meant for seniors, (even though a timetable snafu means next-door neighbor Noah has been assigned it too although he can’t sing to save his life and has never shown any interest in theater.) But Kate finally gets a lead role in the musical, and is playing opposite Matt—a role which includes a kiss. Kate and Andy try to lay down some ground rules so that neither of them get hurt as they realize that Matt is more than just a crush to both of them. But it’s hard to keep feelings and desires bound to rules. With Raina and Brandie as the other members in Kate and Andy’s tight friendship squad, a reemerging relationship with Kate’s brother Ryan, and neighbor Noah Kaplan, who always seems to be around suddenly, KATE IN WAITING is both delightful as a YA rom-com, as well as a deeper exploration of nuanced emotions and relationships between family members, friends and romantic interests.

In a recent essay for The New York Times Book Review, Marjorie Ingall calls for children’s book publishers to give us “more and better contemporary stories in which Jewishness isn’t the problem or even the main subject, but rather a facet of the protagonist’s nuanced identity.” Becky Albertalli’s KATE IN WAITING is exactly this kind of story. Its Jewishness is casual, present, positive, unforced and feels authentic. Set in a suburb of Atlanta, Kate is a modern American teen who went to Hebrew School, had a bat mitzvah, and didn’t continue for her confirmation. Her mom is an “oy”er, and a Friday night Shabbat dinner they cook for Matt and his mother is a minor plot point. Being Jewish is a part of Kate that she feels equally sure and unbothered about— but KATE IN WAITING is not “about being Jewish.” It is both a wonderful YA novel from a master author particularly adept at depicting minute and nuanced emotions with the sensitivity of one who can play back a sound no one else hears and yet everyone recognizes immediately as familiar, while also doing something much needed with diversity in general and Jewishness in particular.

Reviewer Meira Drazin’s debut middle grade novel HONEY AND ME was the recipient of the 2016 Sydney Taylor Manuscript Award and is forthcoming from Scholastic Press. She reads widely in many genres, but in particular middle grade and YA, and she is a strong advocate for Jewish education, both formal and informal. She has been a freelance writer for Jewish media and parenting magazines and has an MA in English and Comparative Literature. Originally from Toronto, Meira lived in New York for many years and now lives in London with her husband and four children. She blogs about middle grade books and publishing at https://fromthemixedupfiles.com/.