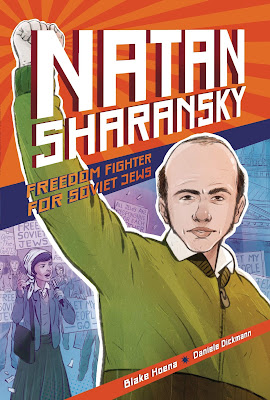 Category: Middle Grade
Reviewer: Shirley Reva Vernick
Buy at Bookshop.org
This graphic novel biography tells the story of Soviet “refusenik" and human rights activist Natan Sharansky. Through narration, dialogue and illustration, the book follows Sharansky’s youth in the Ukraine, his activism on behalf of Jewish refuseniks, his detention in Soviet prison/labor camps, and his ultimate immigration to Israel. In addition to portraying Sharansky as the hero among Soviet Jews, the book rightfully highlights the roles of his wife, international Jewish activists, and world leaders in paving the way for his and other Soviet Jews’ release. A short afterword summarizes Sharansky’s human rights work in Israel since his arrival in 1986.
This is a fast-paced and suspenseful story about the dangers of totalitarianism and the imperative of free speech and religious choice. In about 60 pages, Hoena and Dickmann illuminate not only the facts and historical background of the refusenik saga, but also Sharansky’s personality. The reader experiences his evolving relationship to his Jewishness, his inner strength, his attachment to family, and his wry sense of humor. Indeed, Sharansky’s wisecracks at the expense of the KGB are among the most memorable lines.
The full-color, realistic graphics bring an immediacy and urgency that will draw readers into the drama and remind them not to take liberty for granted. The historical figures are easily recognizable. One question: does the panel depicting Sharansky doing needlework at the labor camp mean that this was his sole forced labor, or was he required to perform harsher work, as well?
This book will make a strong addition to school, library and home collections. It will appeal to middle-grade readers, especially those interested in history.
Are you interested in reviewing books for The Sydney Taylor Shmooze? Click here!