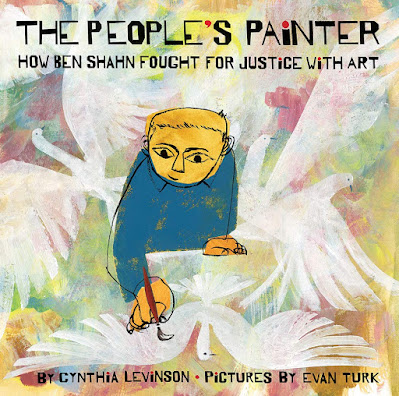 The People's Painter: How Ben Shahn Fought for Justice with Art

Category: Picture Books
Reviewer: Eva Weiss
Buy at Bookshop.org
The People’s Painter is a picture book that steeps young readers in life and times of the iconic American Jewish artist Ben Shahn. Each artful and commanding spread by illustrator Evan Turk re-creates the landscape of the American-Jewish immigrant experience of the turn of the twentieth century. At the heart of the story is Ben Shahn’s coming of age and the passion for justice which shaped his career as an artist. Cynthia Levinson’s narrative gives center stage to the artist’s purposefulness (“What shall I paint? Stories”) and his commitment to righting wrongs (“I hate injustice.”)

The large-size format and illustrations have the look of a picture book for young readers, but the reading level is clearly more suited for middle-school readers. There are moments when the text matches the quirkiness and humor of the illustrations, but for most part, the story is told is told in a matter-of-fact adult voice.

Evan Turk’s masterful illustrations wisely interpret Ben Shahn’s art, but missing are notes to distinguish between Turk’s interpretations and art actually drawn from Shahn’s work. It would have been helpful to have a spread of Shahn’s art and photographs in the Illustrator’s Notes at the end of the book to provide a more first-hand encounter with Shahn’s art.

Overall, The People’s Painter provides children with an enriching encounter with an immigrant Jewish artist who played a compelling role in twentieth-century American art and culture.

In terms of authentic Jewish content, Ben Shahn is clearly identified as an immigrant Jew from the Ukraine who grew up in a traditional home, where he used the Yiddish words for parents and grandparents. There are a few mentions of Ben Shahn’s affinity for the Hebrew alphabet, and the story of a youthful encounter with anti-Semitism is told. But the book doesn’t explore the way in which Shahn’s Jewish heritage may have influenced his passion for justice. During the years when Shahn illustrated the Sacco and Vanzetti trial, he also created well known prints, retroactive illustrations of the Dreyfus Affair. And it was during that era that Ben Shahn created his illustrations for the iconic Passover Haggadah published later in his career. Yet neither the Dreyfus Affair prints nor the Haggadah are mentioned in The People’s Painter. It is, of course, the author’s prerogative to weave her own narrative. But an exploration of the artist’s Jewish cultural ethos would have added a meaningful dimension to the book.

That said, The People’s Painter has literary and artistic merit. The sensitively researched biography, and the author and illustrators notes, reflect that this book was a labor of love. It will provide readers with an important glimpse into lesser known chapters in twentieth century American history and art, and deserves being considered a Notable Book.
Are you interested in reviewing books for The Sydney Taylor Shmooze? Click here! 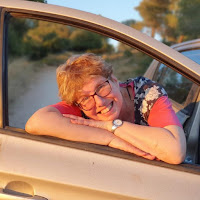 Reviewer Eva Weiss is a writer, editor, and translator. She was born in New York City and worked in the publishing industry there before making her home in Israel many years ago. She is the author of the children's book I Am Israeli (Mitchell-Lane, 2016)
Biography Cynthia Levinson Eva L. Weiss Evan Turk Harry N. Abrams Picture Book Review