Review: When the World Was Ours 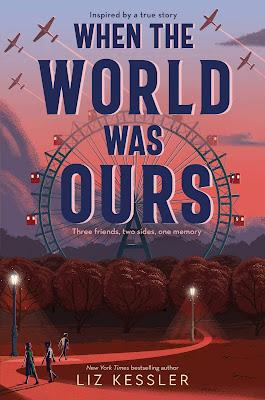 When the World Was Ours

When the World Was Ours follows the lives of Leo, Elsa, and Max from 1936 to 1945. Opening on Leo’s ninth birthday, the three best friends ride Vienna’s giant ferris wheel. When Leo accidentally collides with an English couple, a friendship blooms. The joy of that day does not last long, however. Despite the rising tide of Nazism, Leo’s family remains in Vienna. His father is arrested and sent to Dachau and then to Auschwitz. Leo and his mother scramble to get visas out of Austria, but to no avail. Finally, the couple Leo bumped into on the ferris wheel three years ago agree to sponsor them. Elsa, who is also Jewish, and her family escape to Czechoslovakia, but are eventually sent to Theresienstadt and then to Auschwitz. Max’s father, an ardent Nazi, moves to Munich to work at Dachau. To please his father, Max joins the Hitler Youth. Suppressing memories of his Jewish friends, he soon loves goose-stepping and throwing his arm up in the Nazi salute. Max’s family moves again to Auschwitz, where he becomes a guard. In a harrowing scene at the climax, Elsa confronts Max, reminding him of their childhood friendship.

Written for ages 12-18, this is a disturbing but honest story of lives swept up in the Holocaust. Told in alternating chapters, it is fast-paced. Spanning the entire length of the war, it provides a wide view of history.

Holocaust stories are not a monolith. When the World Was Ours presents three different scenarios. All the characters are presented authentically and honestly. A note at the opening of the story explains the author’s family history, which serves as the basis for Leo’s story. A list of further reading and resources is provided at the end. Kessler smartly uses third person for Max’s chapters, Leo and Elsa’s are in first. Third person provides a bit more distance to his difficult story, allowing for conjecture on what he could possibly be thinking. There are moments where Leo and Elsa are unusually cognizant, which feels more like authorial intrusion. Also are a few coincidental encounters—Max meeting Leo’s father in Dachau and again in Auschwitz, Elsa meeting Leo’s father in Auschwitz, and then the final scene between Elsa and Max—that stretch the bounds of believability a bit. Still, this is a solid addition to the Holocaust cannon.