Review: Cool for the Summer 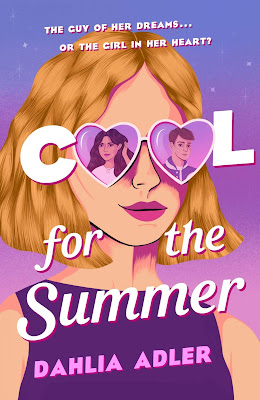 Cool for the Summer

Cool for the Summer follows Larissa “Lara” Bogdan, a high-school senior poised to at last date the boy she’s always had a crush on, only to find that she can’t stop thinking about the summer she spent with Jasmine Killary…who is now enrolled in her high school. Alternating between the present and flashbacks, we follow Lara as she reconsiders everything she had once thought so certain about who she is, and who she wants.

Adler builds a compelling, developed voice for Lara, and a world peppered with enough details to drop the reader straight into a summer in North Carolina’s Outer Banks. From cafes to parties to diners and long summer nights, the book offers a rich, immersive read that balances the lightness of a summer romance with the difficulties of questioning one’s sexuality, on top of all the other anxieties that high school throws in the way.

Lara’s internal struggle to make sense of her identity and properly communicate her feelings toward Jasmine is richly developed. Her doubts and discomforts with labels come across as authentic and nuanced. Despite the book’s high-concept hook, however, the main conflict hinges on a miscommunication, and throughout rather lacked the sense of stakes and tension I would have ordinarily expected from a high school love triangle. But readers looking to be swept up in the romance and drama of summer flings and the messiness of the fallout will undoubtedly love this book.

It was refreshing to read a book with a main character and love interest who were not only Jewish, but were the kinds of Jews that rarely get depicted in the YA space. Lara is a Russian Jew, and Jasmine is a Syrian Jew, and the book centers a queer romance. Jewishness is not the focus of the text, but it is presented in a positive and authentic way. For the purpose of the Sydney Taylor Book Award, there might not be enough Jewish content to be a contender (a few passing mentions of Jasmine’s Magen David and Hamsa necklace, a suggestion of inter-faith drama between Jasmine’s parents, and a mention of Shabbat candles is about the extent to which there is Jewishness discussed on the page), but as a reader it is always exciting to see examples of casual Jewishness worked so effortlessly into a romance. It is truly a perfect, summery escape for all year round!
Are you interested in reviewing books for The Sydney Taylor Shmooze? Click here!

Reviewer A.R. Vishny is a writer, attorney, and occasional television extra based in NYC. Her work has appeared in Alma. Though books will always be her first love, she also has a thing for cake and period dramas, and can be found talking about all that and more at http://twitter.com/AR_Vishny.
A.R.Vishny Dahlia Adler LGBTQIAA+ Review Wednesday Books Young Adult