Review: A Queen to the Rescue 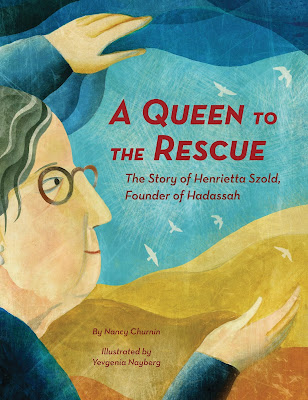 A Queen to the Rescue: The Story of Henrietta Szold, Founder of Hadassah

Category: Picture Books
Reviewer: Beth Gallego
Buy at Bookshop.org
Growing up the daughter of a Rabbi in Baltimore just after the Civil War, Henrietta Szold saw many people in need and wanted to help. She took particular inspiration from the Purim story she heard every year. Queen Esther - Hadassah in Hebrew - was her model of a brave woman standing up for her people and making a difference.
Opportunities for women to help others, though, were limited. Szold was not interested in the expected path of marriage and children. She became a teacher, opened a night school for new immigrants to learn English after work, and started the Jewish Publication Society.
After the turn of the century, she visited Jerusalem and saw children in need of food and medicine. This was a job far too big for one person, so Szold created a women’s charitable organization in 1912. In the following decades, that organization - Hadassah - would send medical aid to Jerusalem and rescue 11,000 Jewish children from Europe as Hitler rose to power.
Churnin traces Szold’s life and work with key moments from childhood until her death in 1945. The opening scene shows Szold as a child contemplating the story of Queen Esther and wondering if she could be that brave. The book comes full circle with a closing scene of Szold with some Youth Aliyah children on the verge of their new lives. Young readers can both identify with Szold in her own childhood and see that as an adult she helped thousands of children just like them.
Nayberg’s illustrations beautifully provide mood and depth throughout the work. When the text refers to the aftermath of the Civil War, the difficulties faced by new immigrants, and the growing horrors of 1930s Germany, the palette is dark and heavy, with layers of gray and black. These contrast with scenes of Szold teaching, writing, and organizing, in which bright colors are set against open white backgrounds.
The excellent back matter includes a timeline of Szold’s life, an explanation of the Purim holiday and its significance to Szold, and an author’s note with more biographical details.
This is an exceptional introduction to a little-known figure with a major historical legacy. Hadassah is now the largest American Jewish women’s organization and continues to fight hate and antisemitism while working toward international health equity. Churnin keeps this biography relevant to young readers by highlighting Szold’s work with children, and the tone of the narrative reflects Szold’s determination to do good in the world, even as dark events are depicted with age-appropriate delicacy. It is a strong contender for the Sydney Taylor award.
Are you interested in reviewing books for The Sydney Taylor Shmooze? Click here!

Reviewer Beth L. Gallego grew up outside Chicago, earned her Master’s degree in Library and Information Science at the University of Illinois, and promptly moved to sunny Southern California, where she has been a Librarian since 2002.
Beth L. Gallego Biography Creston Books Nancy Churnin Picture Book Review