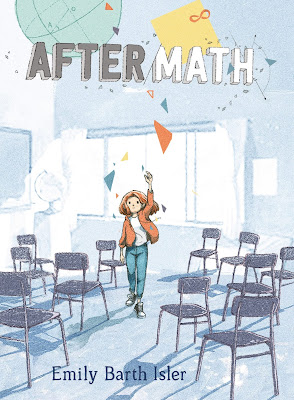 Category: Middle Grade
Reviewer: Heidi Rabinowitz
Aftermath joins other modern explorations of grief for young people such as Sorry for Your Loss by Joanne Levy, All Three Stooges by Erica Perl, and Dancing at the Pity Party by Tyler Feder. This book, uniquely, contemplates not only personal loss but communal loss.
Middle schooler Lucy's little brother Theo has recently died from a heart defect, and the family's attempt at a fresh start in a new town means that Lucy loses her school and her friends along with her home. Even worse, the fictional DC-area town to which they move is deeply scarred by a school shooting that happened four years ago. Lucy feels that her own grief can't compete with that of her new schoolmates, but finally starts to heal through an after school mime class which encourages her to express her feelings, through befriending the unfairly ostracized sister of the dead shooter, and through hard but honest conversations with her parents.
Lucy's first person narration is articulate and emotionally intelligent. The traumatized characters behave in realistic, if not always healthy, ways. Refreshingly, there are no villains or bullies here, just fallible human beings working things out. Lucy's love of mathematics offers an avenue for meaningful metaphors, particularly the concept of infinity as applied to grief and to love. The diversity of the community is naturally integrated into the story through ethnic names, brief descriptions of characters' skin tone or hair texture, and the matter-of-fact mention of a schoolmate's two moms attending the mime performance. Respect is shown throughout for the importance of attending to mental health.
Lucy's family is Jewish but the explicit Judaic content of the book is minimal: a few mentions of holidays and of past conversations with a rabbi. No Jewish actions take place during the story. Yet, the story offers an inherently Jewish perspective on mourning: that it shouldn't be done alone, that healing comes when the dead are remembered and the living are embraced. While not "Jewish enough" to qualify for a Sydney Taylor Book Award, it does offer representation of a Jewish family seamlessly integrated into its larger community, and its sensitive representation of the human condition is outstanding.
Are you interested in reviewing books for The Sydney Taylor Shmooze? Click here!

Reviewer Heidi Rabinowitz is one of the co-admins of The Sydney Taylor Shmooze, along with Susan Kusel and Chava Pinchuck. She hosts The Book of Life Podcast: A Show About Jewish Kidlit (Mostly) at bookoflifepodcast.com. Heidi is Past President of the Association of Jewish Libraries, and Library Director at Congregation B'nai Israel of Boca Raton, Florida.
Carolrhoda Emily Barth Isler Heidi Rabinowitz Middle Grade Review