Review: The Boy Who Failed Show and Tell 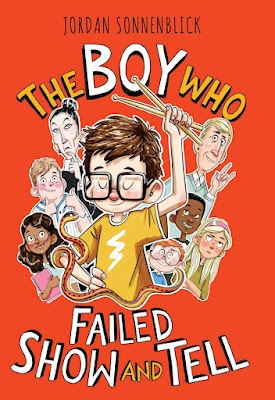 The Boy Who Failed Show and Tell

Category: Middle Grade
Reviewer: Beth L. Gallego
Buy at Bookshop.org
Jordan Sonnenblick takes us back to his childhood with this lightly-fictionalized account of his own fourth-grade year. It gets off to a rough start. He doesn’t get past the first day before breaking one of Mrs. Fisher’s Rules for Successful and Mature Fourth Graders. He has always had trouble sitting still and paying attention, and his new asthma medication has made it worse. His pet garter snake, Hector, unexpectedly gives birth to a whole bunch of baby snakes that need new homes. And his parents sign him up for drum lessons, but he doesn’t have a drum at home - he has to practice on a large dictionary.
Jordan faces indignities and setbacks with determination and wry humor. He is a good-natured, likable tween boy trying to figure out the sometimes baffling world around him. Marta Kissi’s black-and-white drawings match the energy and wit in the narration, illustrating such moments as bespectacled young Jordan jumping on hotel beds with his older sister, falling off waterskis wearing an oversized life jacket, and caught in the blissfully unaware moment of goofing off before realizing the dreaded Mrs. Fisher is standing right behind him.
Until Jordan mentions the upcoming “1979 Little League season”, the chronological setting is unclear, but it is obviously a time in the past. There are no references to cell phones or the Internet, and it’s likely that Jordan would be prescribed something more than drum lessons for his hyperactivity in the classroom today. Still, many of his experiences and feelings are timeless and will ring true for middle graders today: confusion at the arbitrary rules imposed by adults, apprehension about starting a new school, desire to be cool and stand out in some special way. Readers will share in Jordan’s frustration, laugh along with him, and keep hoping - as he does - that the future will bring something better.
Casual references to Jordan’s family’s Judaism are scattered throughout the text. Hanukkah is a significant event, and he attended pre-school at the JCC. At Thanksgiving dinner, there is much consternation about cousin Shira, who may be disowned if she doesn’t break up with her non-Jewish boyfriend, but that’s among the adults. Being Jewish is just a part of Jordan’s life, a background aspect that gets less focus than his struggles on the baseball field or with learning drumming patterns. While this content may not be significant enough for serious Sydney Taylor Award consideration, it is a joy to read about the realistic adventures of an everyday Jewish kid.
Are you interested in reviewing books for The Sydney Taylor Shmooze? Click here!