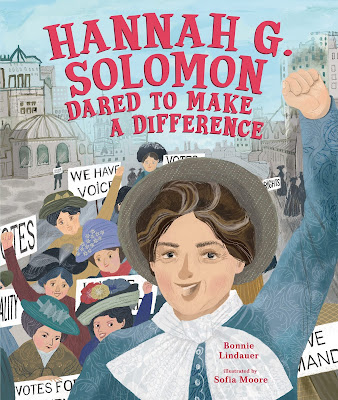 Category: Picture Books
Reviewer: Beth L. Gallego
Buy at Bookshop.org
The 1893 Columbian Exposition - better known today as the Chicago World’s Fair - introduced many inventions and innovations, including electric lamps and the Ferris wheel. It was also the birthplace of the National Council of Jewish Women (NCJW), thanks to the efforts of Hannah Greenebaum Solomon.
Born to German immigrant parents in 1858, young Hannah grew up encouraged to treat all people with respect and to help those less fortunate than herself. Her parents set the example, working to aid new immigrants, impoverished families, and people fleeing slavery. In the aftermath of the Great Chicago Fire in 1871, Hannah’s parents opened their home to those who had lost theirs.
As an adult, Hannah was among the first Jewish women admitted to the Chicago Women’s Club. Her community service work attracted the attention of the World’s Fair organizers, who asked her to plan some activities for Jewish women. The committee planning activities for Jewish men turned her away, so she decided to “show them what a woman can do!” She invited notable Jewish women from across America to speak on important issues. From this conference, the NCJW was founded, with Hannah G. Solomon as its first president.
Throughout her life, Solomon fought the notion that women should be nothing more than wives and mothers. She advocated for women and children, working with the NCJW, Hull House, the Maxwell Street Settlement House, and the women’s suffrage movement.
Lindauer packs many of Solomon’s achievements into clear, concise paragraphs infused with admiration and respect for her subject. While no citations are given for quotations within the text, they are presumably from Solomon’s autobiography, which Lindauer notes was a primary source in her research. The back matter includes an author’s note, photographs of Solomon and Hull House, and a timeline.
Moore’s dynamic illustrations use bright color and line to create a layered effect. Soft black line-sketched backgrounds and abundant white space center richly-colored foreground figures throughout the text. A double-page spread accompanying Hannah’s memory of the Great Chicago Fire is an exception: gray smoke and orange flame fill the space behind the details of buildings and people.
The illustrations are rich with period details bringing nineteenth-century Chicago to life, from the horse-drawn fire truck to the ladies’ fashionable dresses. Jewish life is also highlighted in images of the Greenebaum family gathered around the Shabbat dinner table, a menorah on a fireplace mantel, and young boys wearing yarmulkes.
This engaging, informative biography casts a well-deserved spotlight on a Jewish woman who achieved much, but is not well-known today. It should be read widely and strongly considered for the Sydney Taylor Book Award.
Are you interested in reviewing books for The Sydney Taylor Shmooze? Click here!

Reviewer Beth L. Gallego grew up outside Chicago, earned her Master’s degree in Library and Information Science at the University of Illinois, and promptly moved to sunny Southern California, where she has been a Librarian since 2002.
Beth L. Gallego Bonnie Lindauer Kar-Ben Picture Book Review Sofia Moore