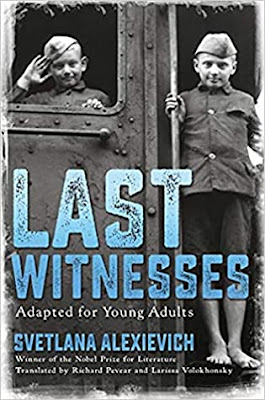 by Svetlana Alexievich, Translated by Richard Pevear and Larissa Volokhonsky

Category: Young Adults
Reviewer: Meg Wiviott
Buy at Bookshop.org
In August 1939, Nazi Germany and the USSR signed the Molotov-Ribbentrop Pact, an unofficial agreement in which the two countries agreed to stipulations of non-aggression against one another and to partition and divide Poland. Despite this agreement, German invaded the Soviet Union in June of 1941. Last Witnesses (Adapted for Young Adults) presents an oral history of the children of the Great Patriotic War (what we in the West know as either Operation Barbarossa or the Eastern Front of WWII). Originally published for adults in Russian in 1985 as Last Witnesses: An Oral History of the Children of World War II, Penguin Random House has now made both adult and a young adult adaptation available in English.
Nobel Prize winning author Alexievich’s interviews with survivors of the invasion and four years of war provide a harrowing story not often covered in WWII or Holocaust studies. One constant theme through the sixty-five stories—and I use that term loosely as these are forty-year-old memories of trauma—is the loss of or separation from parents, caused not only by death but by physical separation. The invasion occurred in June, as many young Soviet children were away at Pioneer Camp. Towns and cities were overrun swiftly and children were moved further East, away from the conflict. Many children grew up in orphanages or were taken in by strangers. Few were reunited with their parents. Alexievich’s work provides greater insight to the breadth of the Holocaust; a reminder that Jews were not the only victims of the Holocaust, somewhere between 13 and 15 million Soviet citizens were murdered by Nazis.
This book has tremendous literary merit and should be added to every WWII and Holocaust collection. The research is impeccable and the content is appropriate for young adult readers (I would point out that there is a difference between ‘adapted for’ and written for). However, it does not meet the criteria for the Sydney Taylor Book Award. While it is a book about the Holocaust, it is not a story about Jews.
Are you interested in reviewing books for The Sydney Taylor Shmooze? Click here!

Reviewer Meg Wiviott is the author of PAPER HEARTS, a young adult novel-in-verse based on a true story of friendship and survival in Auschwitz. PAPER HEARTS made the 2016 YALSA Best Fiction for Young Adults and the Amelia Bloomer lists. It was also a Cybils Poetry Finalist and a 2015 Nerdy Poetry and Novel in Verse Winner. Meg is also the author of the award winning picture book, BENNO AND THE NIGHT OF BROKEN GLASS, which tells the story of Kristallnacht through the eyes of a cat. She holds an MFA from the Vermont College of Fine Arts.
Delacorte Books for Young Readers Holocaust Meg Wiviott Review Svetlana Alexievich Young Adult