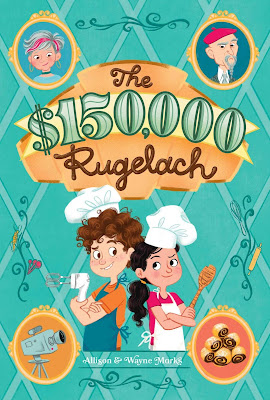 by Allison and Wayne Marks, illustrated by Ariel Landy

Category: Middle Grade
Reviewer: Judith S. Greenblatt
Buy at Bookshop.org
Jillian Mermelstein and Jack Fineman both love to bake, and they are both Jewish, but Jillian is somber, while Jack is a goofy extrovert. Their similarities and their differences are the key elements in this charming, well-told tale. The story revolves around a baking contest that will garner much publicity as well a $150,000 prize. Will Jack’s parent’s let him enter? Will Jill allow her story to be told? And will they go along with the villainous plans of creator of the contest, Phineas Farnsworth III? You will guess the outcome, but there are many smiles along the way. Among the other well drawn characters are the back-up players, Jack’s parents and brother, Jill’s father, and especially her grandmother. The path to the prize is strewn with lies, half-truths and difficulties which must be overcome. Under the wackiness is an important message about understanding and respecting those who are different, listening to others with an open mind, and supporting friends and family.
The style, vocabulary, and format are very appropriate to a middle grade book. I am fascinated by the names Jack and Jillian, which bring to my mind both the nursery rhyme and the Lousia May Alcott book, Jack and Jill. Illustrations in the pre-pub pdf that I saw are limited to small sketches at the beginning of each chapter, and capture the spirit of the text. Stir well, and enjoy.
The $150,00 Rugelach is about food – what could be more Jewish? The most important food is chocolate rugelach, and the recipe is included! Jewish baking is part of both Jack and Jillian’s backgrounds. Jillian’s late mother was a baker who put love in all her cooking - a trope found in folktales about recreating food. Jack’s grandmother baked challah on Friday, “hamantaschen for Purim, macaroons for Passover, and sufganiyot for Hanukkah.”
Cooking is a way of getting to the heart of the matter. The story is about a girl struggling to help her father, to honor her father – what could be more Jewish? It is about a girl struggling with her identity after the death of her mother – what could be more Jewish? And it’s about love being an essential part of successful cooking, which is a trope found in Jewish folklore. The villain of the piece is also tied to Jack’s family. He had the city tear down the building which held Jack’s grandparent’s bakery, ending the production of challah, hamantashen, macaroons, and sufganiyot. Jillian and Jack win the contest by outwitting Farnsworth and defeating him with his own memories. What could be more Jewish?
Are you interested in reviewing books for The Sydney Taylor Shmooze? Click here! 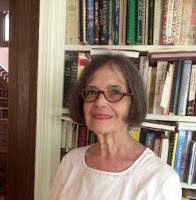 Reviewer Judith S. Greenblatt says: I hold a Master of Library Service from Rutgers-The State University, and a Master of Arts in Jewish Studies from Hebrew College, Newton, Ma. I started my career as a Judaic Librarian as Librarian at the Michael Lichtenstein Memorial Library, Temple B'nai Israel, Toledo, Ohio. as Director of Library Services at the Bureau of Jewish Education of Rhode Island, served as Vice President and President of the School, Synagogue and Center Division of AJL. Publications include: 1985-86 Book lists; for young children, for 3rd to 6th graders, for young adults, 100 Plus Books For The Children's Library: A Basic Collection. Weine Classification Scheme for Judaica Libraries. Revised by Judith S. Greenblatt, Chairman. 8th edition. Association of Jewish Libraries, Synagogue, School and Center Division, 1994.
Allison and Wayne Marks Ariel Landy Judith S. Greenblatt Middle Grade Review Yellow Jacket